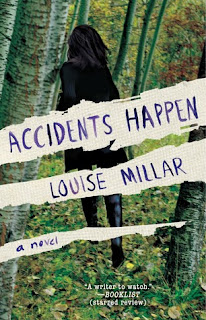 Kate Parker has weathered unimaginable horrors—her parents died in a traffic accident on her wedding night, and her husband, Hugo, was murdered in a tragic break-in gone wrong. All she has left is her young son, Jack, and determined to make a better future for him, she attempts to pull her life back together. But are she and her son safe?

This book was creepy, and very difficult to put down. Kate Parker has had many difficulties in her life, losing her parents and then a few years later her husband is murdered. Anyone going through problems like that so close together would be nervous, and Kate has issues moving away. She wants to keep herself and her son as safe as possible, but it becomes a problem where Kate is not actually living her life anymore.

While reading this book, I felt bad for Jack, seeing what his mother puts him through, it's hard to understand why Kate has gone off the way she does. It's scary to think of someone having their lives revolve around what time is safest to go out, and have so many death statistics running around in their mind all the time.

Kate does realize her problem and she tries to fix it so that she can pull her life together, she tries therapy but she feels that people don't understand her. She eventually meets someone that brings her out of her shell and really helps her begin to change her life. I did feel that some of the things Kate did were a little over the top, I felt that if someone asked me to do some of those things to help change my life that I would be skeptical of them. I felt that with how unsure Kate was of the world, she was very trusting of this person so soon after meeting them.

Honestly though, this book had a great creepy factor to it, Kate has all these things continually happening to her and no one else believes her. And there is an added viewpoint of someone who seems out to get her... who is this person? I did kind of see something coming, but the explanation completely through me for a loop, and it was intriguing.

I did have one issue while reading this, and that was the quick changes in voice from Kate to her son, Jack (there wasn't always a clear definition of who I was following, and the copy I read from did not have anything to distinguish when one voice was over and a new one was starting).

Other than that one small issue (which could have been because it was an advance e-copy), I really enjoyed reading this book and following as Kate tries to pull herself together or risk losing what she has left of her family. And to watch what she does when she finds herself in danger once again.