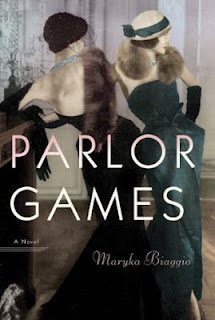 Pages: 352
Received: Received a copy from the publisher through NetGalley

The novel opens in 1917 with our cunning protagonist, May Dugas, standing trial for extortion. As the trial unfolds, May tells her version of events.

In 1887, at the tender age of eighteen, May ventures to Chicago in hopes of earning enough money to support her family. Circumstances force her to take up residence at the city’s most infamous bordello, but May soon learns to employ her considerable feminine wiles to extract not only sidelong looks but also large sums of money from the men she encounters.  Insinuating herself into Chicago’s high society, May lands a well-to-do fiancé—until, that is, a Pinkerton Agency detective named Reed Doherty intervenes and summarily foils the engagement.

Unflappable May quickly rebounds, elevating seduction and social climbing to an art form as she travels the world, eventually marrying a wealthy Dutch Baron. Unfortunately, Reed Doherty is never far behind and continues to track May in a delicious cat-and-mouse game as the newly-minted Baroness’s misadventures take her from San Francisco to Shanghai to London and points in between.

The Pinkerton Agency really did dub May the “Most Dangerous Woman,” branding her a crafty blackmailer and ruthless seductress. To many, though, she was the most glamorous woman to grace high society. Was the real May Dugas a cold-hearted swindler or simply a resourceful provider for her poor family?

As the narrative bounces back and forth between the trial taking place in 1917 and May’s devious but undeniably entertaining path to the courtroom—hoodwinking and waltzing her way through the gilded age and into the twentieth century—we're left to ponder her guilt as we move closer to finding out what fate ultimately has in store for our irresistible adventuress.

A historical fiction novel about a con artist, well let's say I was intrigued. I will admit that the cover of this book turned me off a little, it seems a bit cartoony, but the synopsis kept me interested (and since I had an ebook version the cover didn't make much of a difference to me). I really enjoyed the perspective that this story is told in, May is telling her story to readers so that we get a different side from what we think we know.

May has found herself in trouble once again, and this time the trouble has landed her in court, which is where she starts the story. But she wants her readers to be the jury and she tells her whole life story of what brought her to this point, and it really makes readers wonder if she really is guilty of the crimes that she is being persecuted for. I really enjoyed the back and forth of the ongoing trial and May's actual story to see where things get twisted, though it also gets the reader thinking... Is May a reliable narrator?

There is so much travelling throughout this book, May goes all over the world, and I love the different experiences she has at each place she stops. I had so much fun travelling along with May, as she learns about the world on her own, and meets so many interesting characters along the way. Many of whom have such a large impact on her life. She falls in love with some, and uses others to get through each day, all the while trying to take care of her family.

There were a few things that took away from the story in my opinion, the first being the Pinkerton detective, Reed Dougherty. I found it a bit much that with all the different places May travels to over the years, this one detective continually finds her, he is always showing up and I just found it to be over the top, especially when it comes to what happens at the end of the book. I also found that the book is quite long and some parts dragged on a but too much for me to really enjoy the story. There were a lot of descriptions of what May did when she was at a certain place and with certain people that it just seemed too long.

For the most part, I really enjoyed the story and following May`s travels and how she was able to get out of scrapes. This was definitely a fun and interesting story, but a bit long at parts.
Posted by Andrea @ Cozy Up at 10:20 AM