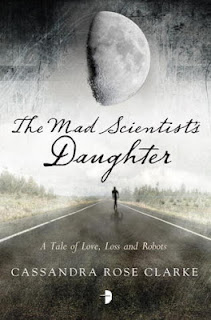 The Mad Scientist’s Daughter is the heartbreaking story of the journey from childhood to adulthood, with an intriguing science fictional twist.

There’s never been anyone - or anything - quite like Finn.


He looks, and acts human, though he has no desire to be. He was programmed to assist his owners, and performs his duties to perfection. A billion-dollar construct, his primary task is to tutor Cat.

When the government grants rights to the ever-increasing robot population, however, Finn struggles to find his place in the world.

The Mad Scientist's Daughter opens up with Finn being brought to spend time with Cat and her family, and he becomes Cat's tutor when she is a young girl. Finn is a robot, unlike any other, he looks like a person and for the most part acts like any other person as well. This story is about how Cat grows up and how her relationship with Finn changes and grows as she does.

I've heard from many people that Clarke's debut novel THE ASSASSIN'S CURSE was such a fun read, and her writing was awesome, so I was intrigued at what her writing would be like, and this story sounded so beautiful that I knew I would read it ASAP. I was really intrigued with the romance story taking place, and how you really get to see Car grow up and change throughout the novel.

I really found this story to be beautiful, it's one of those stories that if you think about it too much than your opinion will change. I found that by staying immersed in the story and just going with the flow that I really felt for Cat and Finn and everything they had to overcome. Cat was a very complex character, she grows up with Finn and eventually falls in love with him, but she must deal with the struggle of never being together because he is a robot. Everything that Cat goes through is so heartbreaking and I loved seeing her and Finn have scenes together because there was so much tension.

The one little issue I had with the book was how it was broken up at times. I found that there was a lot of jumping forward years, I felt like there was more I wanted to know about Cat as she grew, though I do understand it is hard to do so in a story that is so filled with information already. I loved as time went by, there is a new view on robots on the world and there is a fight about giving them rights, it adds a lot to the story.

This story is a beautiful love story, as long as you don't think too much about what is happening the story will definitely draw you in. If you are someone who really thinks about what you are reading than this story will be weird for you. But if you just let the story go, you can become immersed in Clarke's writing and her prose.
Posted by Andrea @ Cozy Up at 8:00 AM