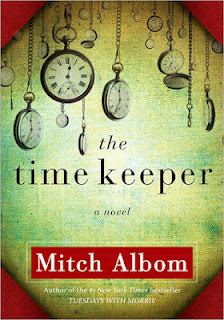 From the author who's inspired millions worldwide with books like "Tuesdays with Morrie" and "The Five People You Meet in Heaven" comes his most imaginative novel yet, "The Time Keeper"--a compelling fable about the first man on earth to count the hours. The man who became Father Time.

In Mitch Albom's newest work of fiction, the inventor of the world's first clock is punished for trying to measure God's greatest gift. He is banished to a cave for centuries and forced to listen to the voices of all who come after him seeking more days, more years. Eventually, with his soul nearly broken, Father Time is granted his freedom, along with a magical hourglass and a mission: a chance to redeem himself by teaching two earthly people the true meaning of time.

He returns to our world--now dominated by the hour-counting he so innocently began--and commences a journey with two unlikely partners: one a teenage girl who is about to give up on life, the other a wealthy old businessman who wants to live forever. To save himself, he must save them both. And stop the world to do so.

Told in Albom's signature spare, evocative prose, this remarkably original tale will inspire readers everywhere to reconsider their own notions of time, how they spend it and how precious it truly is.

Mitch Albom has always had a way with words, and I can't help but admire many of the topics he takes on in his writing. I was really interested in this book because of the synopsis, a book about "Father Time", I was hooked right away. I really love getting into books that make you think about things yourself and THE TIME KEEPER is definitely one of those type of books.

Sadly, I had a few difficulties with this book. The main one being the quick change of characters. I felt like I could never get into the story, there were so many changes from one character to another. I found that every time I was starting to get into Dor's past story, Albom would switch it up to another character. The style of the writing was also difficult at times for me. Each section breaks off with a sentence typed in bold, at times there were only a few sentences between and at other times there were pages. I found myself having difficulties concentrating on the story itself.

I did enjoy the ending. I can't really talk about what I enjoyed about it without spoiling the entire book, but it was a nice way to end things. Though this book did seem to end quite quickly for me everything does come together well.

What I did love about THE TIME KEEPER is what I love about all of Albom's works, he really makes you think about things yourself. The message this book leaves you with really makes you see time as precious and I really feel like I need to appreciate every moment I have. We really don't think about it as often as we should, we are always asking for more time or for time to go by faster.

If you are a fan of Mitch Albom's previous work, this book is perfect for you. He writes with his unique prose and really brings meaning to something for his readers.
Posted by Andrea @ Cozy Up at 11:07 AM