Review: Inbetween by Tara A. Fuller 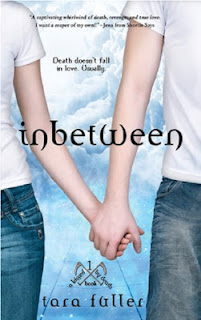 Since the car crash that took her father’s life three years ago, Emma’s life has been a freaky — and unending — lesson in caution. Surviving “accidents” has taken priority over being a normal seventeen-year-old, so Emma spends her days taking pictures of life instead of living it. Falling in love with a boy was never part of the plan. Falling for a reaper who makes her chest ache and her head spin? Not an option.


It’s not easy being dead, especially for a reaper in love with a girl fate has put on his list not once, but twice. Finn’s fellow reapers give him hell about spending time with Emma, but Finn couldn’t let her die before, and he’s not about to let her die now. He will protect the girl he loves from the evil he accidentally unleashed, even if it means sacrificing the only thing he has left…his soul.

I've been getting into the angel books a lot more lately because they all have something so different to them, and this book really stood out for me because it was a whole new take on that... now we are getting into the reaper books. I was really interested in this one when I read the synopsis, I needed to get my hands on it ASAP.

Everything that happens throughout keeps the reader interested and glued to the pages to see what will happen next. The story behind Finn and Emma is what really keeps you coming back to this book, there is a whole back story that slowly unravels during everything. I would have liked us to know a little less about the background story, I think it would have been a little more fun to learn everything along with Emma, but I was still interested in everything to see what would happen when everything was realized.

I was not a big fan of the character of Emma, I understand there were a lot of "accidents" that happen to her through the years but I felt that she needed to do more during the story. I loved her friend, Cash, he was so much fun and so full of life, he was the complete opposite of Emma. I wanted more of them together because he seemed to ground Emma a lot. Finn was an interesting character as well, watching him take on the job of protecting Emma while hiding it from those around him and still doing his job of a reaper.

For this type of book I found there was a great mix of action with the romance. Fuller has a great style of bringing out the feelings of her characters and making her readers feel those emotions as well. The love that Finn feels for Emma really comes out strong. The ending came us a surprise to me but was really adorable, I'm excited to see where Fuller takes her characters in the next book. There is still so much to deal with.
Posted by Andrea @ Cozy Up at 9:00 AM