Review: How Lucky You Are by Kristyn Kusek Lewis 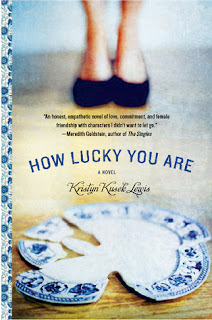 
In the tradition of Emily Giffin and Marisa de los , HOW LUCKY YOU ARE is an engaging and moving novel about three women struggling to keep their longstanding friendship alive. Waverly, who's always been the group's anchor, runs a cozy bakery but worries each month about her mounting debt. Kate is married to a man who's on track to be the next governor of , but the larger questions brewing in their future are unsettling her. Stay-at-home mom Amy has a perfect life on paper, but as the horrific secret she's keeping from her friends threatens to reveal itself, she panics.

As life's pressures build all around them, Waverly knows she has some big decisions to make. In doing so, she will discover that the lines between loyalty and betrayal can become blurred, happy endings aren't always clear-cut, and sometimes you have to risk everything to gain the life you deserve.

HOW LUCKY YOU ARE really stuck out to me because it is a book that really focus on a close friendship between three women that grew up together, and really shows the way that it changes over the years. I was really struck by the reality of this book and the issues that Lewis deals with.

This book started out a lot like any other chic lit novel does, with us getting to know the characters and their history, the difference with this story is that as we see there are issues with each of the characters, Lewis shows it in a more dramatic than comedic way. The whole story is told from Waverly's POV, so we come to know her issues right from the beginning but we slowly learn about the other characters. I really enjoy a book where there are secrets that slowly unravel for the readers.

As the story went on I found myself surprised at some of the things that came out and how the characters dealt with those issues. It was difficult to read at times because I wanted to yell and scream at these women throughout, but that is what made this book so amazing, is that these situations are so real and their reactions to those things were very real and happen every day. Throughout everything, I continually wondered how I would deal with things if it was me in that situation, especially as everything builds up on Waverly. I admired her for some of the things she did because I could connect with her in the fact of being independent and having trouble asking for help.

Lewis ended this story in an interesting way, I found it very open-ended and I can definitely see another story with these characters in the future (*fingers crossed*). There is still so much to learn about the characters and see where their decisions take them. I liked that for once not everything ended in the kind of "everyone is happy and life is perfect" way that a lot of books do, this one left the reader with a lot of questions (which was a little disappointing to me).

For a debut novel I was really impressed with the story and the emotional depth that Lewis takes, and I will be happy to read more from her in the future.
Posted by Andrea @ Cozy Up at 8:00 AM