Review: The Secret Life of the American Musical by Jack Viertel 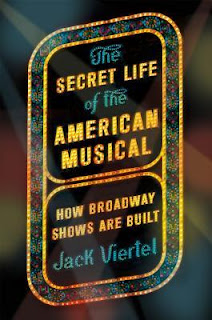 
In The Secret Life of the American Musical, Jack Viertel takes them apart, puts them back together, sings their praises, marvels at their unflagging inventiveness, and occasionally despairs over their more embarrassing shortcomings. In the process, he invites us to fall in love all over again by showing us how musicals happen, what makes them work, how they captivate audiences, and how one landmark show leads to the next—by design or by accident, by emulation or by rebellion—from Oklahoma! to Hamilton and onward.

Structured like a musical, The Secret Life of the American Musical begins with an overture and concludes with a curtain call, with stops in between for “I Want” songs, “conditional” love songs, production numbers, star turns, and finales. The ultimate insider, Viertel has spent three decades on Broadway, working on dozens of shows old and new as a conceiver, producer, dramaturg, and general creative force; he has his own unique way of looking at the process and at the people who collaborate to make musicals a reality. He shows us patterns in the architecture of classic shows and charts the inevitable evolution that has taken place in musical theater as America itself has evolved socially and politically.

The Secret Life of the American Musical makes you feel as though you’ve been there in the rehearsal room, in the front row of the theater, and in the working offices of theater owners and producers as they pursue their own love affair with that rare and elusive beast—the Broadway hit.

I am trying very hard to get out of my usual reading habits and try something new, I am not one for non-fiction but I'm seeing ones pop up that I believe are great ways to start with for me. I love plays and especially Broadway musicals, it's always been on my list to see a show on Broadway in New York City, so when I saw this book I was interested and I thought it was a great way to get into something new.

I definitely found this book to be interesting, the way Jack discusses how a Broadway play is made and the way he shows through many examples of different plays. I could sit there and picture other plays that definitely had the same story arc to get through. Jack Viertel definitely organized his book in the way that a Broadway play is put together, that I almost felt at times I was actually sitting watching a play myself.

The one thing that got me was that some of the chapters seemed to drag on a little bit, where it felt that Jack was overdoing his examples. Yet I understand, he wants to show that some musicals may veer a little off course yet they still stick to main plot line, making sure to have the lightness and the dramatic songs to keep the audience interested. The one thing that gave me trouble while reading it was Jack's comments on the racial side of Broadway. I'm not exactly sure how to explain it, but I can say it was a put off... it felt aggressive to me as a reader. That was the biggest thing for me, other than that, when Jack Viertel stayed on the topic of how a musical is set up it was great to read.