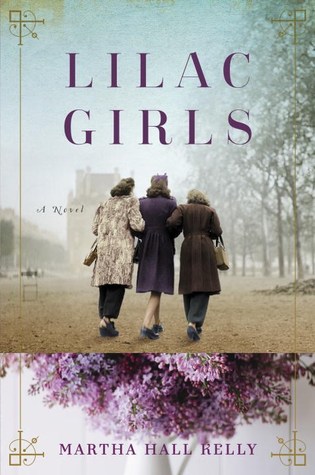 Publisher: Ballantine Books
Pages: 496
Received: Received a copy from the publisher through Netgalley

Inspired by the life of a real World War II heroine, this powerful debut novel reveals an incredible story of love, redemption, and terrible secrets that were hidden for decades.

New York socialite Caroline Ferriday has her hands full with her post at the French consulate and a new love on the horizon. But Caroline’s world is forever changed when Hitler’s army invades Poland in September 1939—and then sets its sights on France.

An ocean away from Caroline, Kasia Kuzmerick, a Polish teenager, senses her carefree youth disappearing as she is drawn deeper into her role as courier for the underground resistance movement. In a tense atmosphere of watchful eyes and suspecting neighbors, one false move can have dire consequences.

For the ambitious young German doctor, Herta Oberheuser, an ad for a government medical position seems her ticket out of a desolate life. Once hired, though, she finds herself trapped in a male-dominated realm of Nazi secrets and power.

The lives of these three women are set on a collision course when the unthinkable happens and Kasia is sent to Ravensbrück, the notorious Nazi concentration camp for women. Their stories cross continents—from New York to Paris, Germany, and Poland—as Caroline and Kasia strive to bring justice to those whom history has forgotten.

In Lilac Girls, Martha Hall Kelly has crafted a remarkable novel of unsung women and their quest for love, freedom, and second chances. It is a story that will keep readers bonded with the characters, searching for the truth, until the final pages.

To be honest this book took me quite awhile to really get into, I think it had to do with how often the story switched perspectives between the three girls. It was really hard to connect in the beginning because the story didn't stick with one person for very long, I'm always a huge fan of historical novels and the fact that this book is based on the lives of real people, it made me more intrigued and really had me pushing to get through.

I know there are a lot of books out there based on events of World War II, but I felt that this one was really different. This story gives readers the view from so many different perspectives during that time, from a woman doctor working in the camps, from a woman who is prisoner in a concentration camp, and then from someone on the other side of the world, whose life changes because of these events as she works for the French consulate. I can definitely say after some time, when I really got into the events, I was truly invested in each woman's storyline (though I feel like Herta's somewhat fizzled out at a certain point, and then we jump back into it later on in the book). Each of them have their own hurdles to get through, and are all trapped in different ways.

This book spans years, showing how these girls deal with not only the horrors of the war, but we also get to see the aftermath and how it has affected their lives for years to come. What I was really looking forward to was how these three ladies would meet and how that would impact their lives, I was truly impressed with how Martha Hall Kelly really brought this out. The stories don't cross right away, we really get to know each of the three ladies before they actually meet, but once they meet their impact on one another is remarkable.

I can truly say that this book really touched me and brought me to tears many times as I followed the stories, but it was mainly Kasia's story that really brought this book together. She is the connecting factor in this story and I found her life to be the hardest (for obvious reasons). But what I found Martha truly brought to life was how it also affected Kasia after the war, how difficult it was for her to be true to herself and to those she loved the most.

I can honestly say that this was a beautiful book, despite some issues in the beginning with the ever changing stories, once things actually settle into a smooth pace this is a book that you want to immerse yourself in. Readers easily connect with the characters and you don't want to let them go, you want to help them through everything and be there for them.
Posted by Andrea @ Cozy Up at 8:27 AM