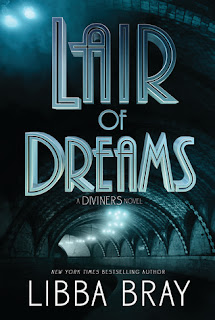 The longing of dreams draws the dead, and this city holds many dreams.

After a supernatural showdown with a serial killer, Evie O’Neill has outed herself as a Diviner. With her uncanny ability to read people’s secrets, she’s become a media darling, earning the title “America’s Sweetheart Seer.” Everyone’s in love with the city’s newest It Girl…everyone except the other Diviners.

Piano-playing Henry DuBois and Chinatown resident Ling Chan are two Diviners struggling to keep their powers a secret—for they can walk in dreams. And while Evie is living the high life, victims of a mysterious sleeping sickness are turning up across New York City.

As Henry searches for a lost love and Ling strives to succeed in a world that shuns her, a malevolent force infects their dreams. And at the edges of it all lurks a man in a stovepipe hat who has plans that extend farther than anyone can guess…As the sickness spreads, can the Diviners descend into the dreamworld to save the city?

Oh gosh, the wait for this book was so hard!! I was in love with The Diviners when it came out and I needed more, even though these books are as big as they are, readers can easily fly through them. Though I will be honest, this one took me a little bit longer to read than the first of the series did. I found myself feeling iffy and sometimes a little uninterested, but then there was a moment that would bring me right back to the story.

Honestly, Libba Bray brings the 1920's to life in such an amazing way, but what is truly amazing about this series is the beautiful cast of characters that each contribute to the story in such a large way. Now that Evie's secret about being a diviner is out in the public, she is almost everybody's favourite person now. Though you can tell that she is hiding something herself, after everything ended in the last book, it left Evie with a fear of what else could be out there.

It took me a bit more time to get into this book, because I think I found myself to be confused as to what was really happening and how the dreams of Henry and Ling meant anything to the story. But as I got deeper into the story, it started to become very intriguing and I wanted to see these two characters find those that they were looking for. Soon this sickness that is taking over the city gets worse and there is only one group that can find the source and save others from the same fate.

While all this is going on with the dream world, Evie is dealing with her own small issues in the real world now that she has become "America's Sweetheart Seer", she is partying every night and trying her best to forget the fateful night that led to all this. Libba Bray truly delves deeper into the dark forces that are taking over the city, and readers slowly learn more about this group of diviners and possibly more about what is after them. This book opened up more about the different characters as we follow them around and delve further into their pasts and learn about what brought them where they are now.

I absolutely love Libba Bray's writing style, the world and characters she has created in The Diviners are both so engrossing that you never want to leave, and I for one will wait as long as need be for the next book in this series! I'm excited to see what new adventures will befall our group of ragtags, and what other horrors Bray can come up with.