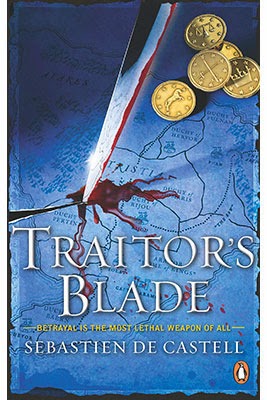 Received: Received a copy from the publisher through NetGalley as part of a blog tour

The King is dead, the Greatcoats have been disbanded, and Falcio Val Mond and his fellow magistrates Kest and Brasti have been reduced to working as bodyguards for a nobleman who refuses to pay them. Things could be worse, of course. Their employer could be lying dead on the floor while they are forced to watch the killer plant evidence framing them for the murder. Oh wait, that’s exactly what’s happening…

Now a royal conspiracy is about to unfold in the most corrupt city in the world. A carefully orchestrated series of murders that began with the overthrow of an idealistic young king will end with the death of an orphaned girl and the ruin of everything that Falcio, Kest, and Brasti have fought for. But if the trio want to foil the conspiracy, save the girl, and reunite the Greatcoats, they’ll have to do it with nothing but the tattered coats on their backs and the swords in their hands, because these days every noble is a tyrant, every knight is a thug, and the only thing you can really trust is a traitor’s blade.

I am very happy to be a part of this tour and talk about this book, it was a great story and the beginning to a new and interesting series. This was actually quite an intense read, there are so many action scenes throughout, and there is a great background to what brought Falcio to where he is now. This book has everything to it, there is a lot of action, political conspiracy and so much intrigue, honestly it was a heart-stopping book.

This book is about Falcio val Mond, a character who is after revenge after having a very difficult time, he and his friends are disgraced everywhere in the country, and have lost their king. They are all seen as traitor's and are seen as the lowest of the low. What is amazing, is that no matter what people think of the Greatcoats, they really stick to their beliefs. Falcio ends up on this quest and it is one where he learns a lot about himself, and gets some insight into his past.

There is so much darkness in this book, meeting the most corrupt people you could find in a book, but Falcio and his friends have this dry humour that through the darkest of times still have you laughing. I always enjoy sarcasm as a comedic device in books, there is something about it that really matches with the dark tone of the book that is already there. You could really see that these three guys were true friends, the way they interacted with one another was true. They would tell each other how it was, and were there for one another when it came down to it, it was such a great addition to the story.

The story tells of Falcio's journey as he tries to honor his king's last wish, along the way he remembers his past and how he became a Greatcoat, and learned to bring justice wherever he travels. The people he meets teach him a lot, especially the young girl he finds and vows to protect. There are so many surprises along the way, and great fantasy aspects to the story.

I truly can't wait for more of Falcio and his friends, and to see where his next journey will take him on his fight for justice. Sebastian de Castell has created a world in disarray and a main character that will fight for everyone's rights. I admire Falcio for knowing when to fight and when to walk away, and for what he believes in, he honestly believes in the rights of the people of the lower class. If you are a fan of high fantasy books with a good amount of action, then I definitely recommend checking out Traitor's Blade.
Posted by Andrea @ Cozy Up at 6:00 AM