Review: The Good Luck of Right Now by Matthew Quick 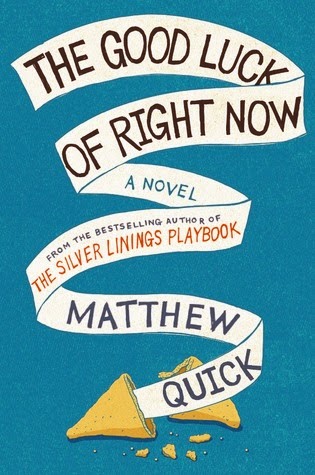 Call it fate. Call it synchronicity. Call it an act of God. Call it . . . The Good Luck of Right Now. From the New York Times bestselling author of The Silver Linings Playbook comes an entertaining and inspiring tale that will leave you pondering the rhythms of the universe and marveling at the power of kindness and love.

For thirty-eight years, Bartholomew Neil has lived with his mother. When she gets sick and dies, he has no idea how to be on his own. His redheaded grief counselor, Wendy, says he needs to find his flock and leave the nest. But how does a man whose whole life has been grounded in his mom, Saturday mass, and the library learn how to fly?

Bartholomew thinks he’s found a clue when he discovers a “Free Tibet” letter from Richard Gere hidden in his mother’s underwear drawer. In her final days, mom called him Richard—there must be a cosmic connection. Believing that the actor is meant to help him, Bartholomew awkwardly starts his new life, writing Richard Gere a series of highly intimate letters. Jung and the Dalai Lama, philosophy and faith, alien abduction and cat telepathy, the Catholic Church and the mystery of women are all explored in his soul-baring epistles. But mostly the letters reveal one man’s heartbreakingly earnest attempt to assemble a family of his own.

A struggling priest, a “Girlbrarian,” her feline-loving, foul-mouthed brother, and the spirit of Richard Gere join the quest to help Bartholomew. In a rented Ford Focus, they travel to to see the cat Parliament and find his biological father . . . and discover so much more.

Matthew Quick is such a great author, I really believe his stories are influential on readers today. Each of his characters are special and really bring to life a different side of people. Bartholomew Neil is such an adorable character, I loved him and readers can connect with him as he is on a journey of self-discovery.

Bartholomew has spent his life taking care of his mother and after she passes away he needs to find a way to start a new life on his own. He is awkward and doesn't really know how to speak to people. The whole story is told in letters that Bartholomew writes to Richard Gere about his life and the people he meets. Bartholomew feels that he has a connection to Richard Gere because his mother had a love for him. I really enjoyed Bartholomew's voice as he told his story of beginning a new life, and the way he talks with Richard Gere as he believes they have a lot in common.

The secondary characters in this are also very special people, the way they help Bartholomew on his journey is amazing. They help bring him out of his shell and become like family to him. Each character is eccentric in their own way, and as they all come together they help each other through their problems. I love that none of these characters is a perfect person, they have their quirks and they have personalities that put them on the outside of society in some ways. Each of them grew on me, and I think the story would not be the same without any of them.

What was also interesting was the way Quick brings religion into the story, there are so many different religions presented and each character finds solace in a different way. Quick shows the pros to all different views of religion and how each of them differs and in a way he connects them and has them work together to help Bartholomew through his grief.

This really was such a beautiful and heartwarming story, Bartholomew is an amazing character that all readers will root for. It's a book about finding the good in everything (even the disappointments at times), and about finding yourself. Definitely an adorable book that I recommend.
Posted by Andrea @ Cozy Up at 6:00 AM