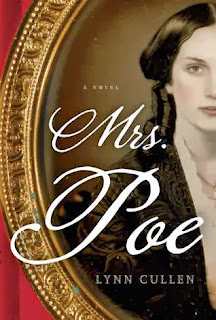 Received: Received an copy from the publisher through Edelweiss/NetGalley

A vivid and compelling novel about a woman who becomes entangled in an affair with Edgar Allan Poe—at the same time she becomes the unwilling confidante of his much-younger wife.

It is 1845, and Frances Osgood is desperately trying to make a living as a writer in ; not an easy task for a woman—especially one with two children and a philandering portrait painter as her husband. As tries to sell her work, she finds that editors are only interested in writing similar to that of the new renegade literary sensation Edgar Allan Poe, whose poem, “The Raven” has struck a public nerve.

She meets the handsome and mysterious Poe at a literary party, and the two have an immediate connection. Poe wants to meet with his wife since she claims to be an admirer of her poems, and is curious to see the woman whom Edgar married.

As spends more and more time with the intriguing couple, her intense attraction for Edgar brings her into dangerous territory. And Mrs. Poe, who acts like an innocent child, is actually more manipulative and threatening than she appears. As Frances and Edgar’s passionate affair escalates, must decide whether she can walk away before it’s too late...

Set amidst the fascinating world of ’s literati, this smart and sexy novel offers a unique view into the life of one of history’s most unforgettable literary figures.

I'm really loving these historical fiction books that revolve around strong characters in literature, this book reminded me a little of Studio Saint-Ex by Ania Szado (which was a beautiful book). I found this story intriguing, a side of Edgar Allan Poe that is unique and definitely keeps readers wanting more from the story.

I found parts of this story creepy and Cullen keeps readers wondering about what is really happening behind the scenes. Frances is an interesting character who has a lot to deal with in this book and the way she handles her situation is amazing and makes her such a strong person. Frances wants so much to become a writer to help sustain her and her family, but what readers want is not exactly what Frances can write. Then she meets Edgar Allan Poe and her whole world is changed, he is a disturbed character that no one can truly understand.

The setting of this book is so realistic and brings readers into a group of intelligent people, and it is continually shown throughout by the stimulating conversations that are placed in the story. All of the characters, main and secondary alike add so much to the story that it wouldn't be the same without any of them. But the character of Mrs. Poe is the most intriguing and mysterious.

She is a young girl who is made out to be very naive about the world around her, when you really see that she knows a lot more than many people think. I loved the dark undertone of this book with so many unnatural circumstances happening as the relationship between Edgar and Frances continues. This is one of those stories where there are secrets hidden everywhere that threaten so many people and you never know who is hiding what.

Cullen has written a very dark and yet romantic story here that will definitely be hard to forget in years to come. She has brought Edgar Allan Poe back to life and makes me interested in studying more about his life.
Posted by Andrea @ Cozy Up at 6:00 AM