Review: The Daughters of Mars by Thomas Keneally 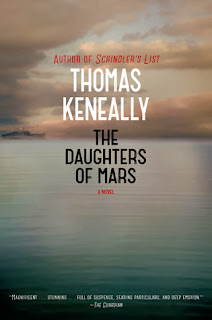 Received: Received an copy from the publisher through Edelweiss/NetGalley

From the acclaimed author of Schindler’s List, the epic, unforgettable story of two sisters from Australia, both trained nurses, whose lives are transformed by the cataclysm of the first World War.

In 1915, two spirited Australian sisters join the war effort as nurses, escaping the confines of their father’s farm and carrying a guilty secret with them. Used to tending the sick as they are, nothing could have prepared them for what they confront, first near Gallipoli, then on the Western Front.

Yet amid the carnage, Naomi and Sally Durance become the friends they never were at home and find themselves courageous in the face of extreme danger, as well as the hostility they encounter from some on their own side. There is great bravery, humor, and compassion, too, and the inspiring example of the remarkable women they serve alongside. In France, where Naomi nurses in a hospital set up by the eccentric Lady Tarlton while Sally works in a casualty clearing station, each meets an exceptional man: the kind of men for whom they might give up some of their precious independence — if only they all survive.

At once vast in scope and extraordinarily intimate, The Daughters of Mars brings World War I to vivid, concrete life from an unusual perspective. A searing and profoundly moving tale, it pays tribute to men and women of extraordinary moral resilience, even in the face of the incomprehensible horrors of modern war.

I am sad to admit that this is actually the first Thomas Keneally book I have read.... and I did enjoy this story, though I will admit to finding it a little tedious to get through at times. I was really interested in seeing how Keneally wrote about the war in this book, and I can definitely say that he makes you feel a lot about what these two characters go through over the years.

What really caught my attention with this book is that it is the story of two sisters who have gone off to be nurses in the war, so we really see a different side of the story. It's great to see a story that is more about a family relationship, these two girls, Naomi and Sally have not been that close and we really see how their relationship changes as they learn more about one another. Both of these girls go through a lot of trials and tribulations and deal with a lot of prejudices that make their time in the war difficult. Sally and Naomi are two completely different characters that deal with their situations in their own way, and I love that they still try and help one another through things.

The one little thing that made this book difficult was how long it was and at times I felt like things were dragging on a little too much. I think it took a little too long to get through some things, and really explaining the relationships that these sisters have with others as well as one another. The story switches back and forth from both of the sisters' perspectives as they begin different journeys in the war. There were a few times where I felt that the perspectives were similar and I couldn't tell which sister I was with.

The relationships these two sisters make are different and I really loved some of those secondary characters, the guys that the sisters fall for really show their different personalities. I was confused a little about how things were progressing, but I loved how they each saw things in a different way when it came to love.

I did really like the story that Keneally brought to life here despite the little issues I had, I think that he does an amazing job showing this side of the war that people really don't hear a lot about. There are a lot of scary events that happen, and you wonder how these characters were able to really get through it. The one thing that I found interesting is how Keneally has this way of showing that Naomi and Sally have this view of how their lives could have been different if certain situations had ended differently.
Posted by Andrea @ Cozy Up at 6:00 AM