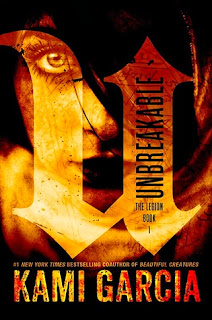 I never believed in ghosts. Until one tried to kill me.

When Kennedy Waters finds her mother dead, her world begins to unravel. She doesn’t know that paranormal forces in a much darker world are the ones pulling the strings. Not until identical twins Jared and Lukas Lockhart break into Kennedy’s room and destroy a dangerous spirit sent to kill her. The brothers reveal that her mother was part of an ancient secret society responsible for protecting the world from a vengeful demon — a society whose five members were all murdered on the same night.

Now Kennedy has to take her mother’s place in the Legion if she wants to uncover the truth and stay alive. Along with new Legion members Priest and Alara, the teens race to find the only weapon that might be able to destroy the demon — battling the deadly spirits he controls every step of the way.

Suspense, romance, and the paranormal meet in this chilling urban fantasy, the first book in a new series from Kami Garcia, bestselling coauthor of the Beautiful Creatures novels.

I think this is one book I have been really excited about this year, the cover itself promises a creepy read and I think Kami Garcia delivered pretty well on that aspect in this book. I was really taken with this story and wanted to know more about the characters.

What I really loved about this book were the action scenes, there are a lot of times where the characters are off fighting ghosts to destroy a demon that is wreaking havoc on them. I felt that Kami Garcia really brings to life the idea of ghosts being real, and I can say that her ghosts are creepy and are ones that I would never want to encounter. I am really interested to learn more about the history of The Legion, there are still a lot of questions left unanswered by the end of the book (I honestly felt that this was a book that just kept me coming up with more questions instead of answering anything, so I can say I will come back to this series).

The one little problem I had with this book was the romance... I felt that it was unnecessary in this book, and in my opinion it made no sense. Everything happened so quickly, one moment Kennedy has no idea who these people are and the next minute she is in love with the twins Jared and Lukas.... I just felt that everything was too convenient and the romance aspect was a filler for the story.

The one thing that I did love was all the characters, they all have such strong personalities and bring something different to the story. Priest had to have been my favourite character, he was quirky and smart, and even though he is the youngest I believe he is one of the toughest characters in this book! I could connect easily with all of them in different ways since they all bring something new to the table.

I'm excited for what will come next, especially with the cliffhanger ending we were left with, but I really want to see less of the romance and a lot more action (not that this book didn't have enough action itself). This is a great read for Halloween coming up!