Blog Tour: The Night Has Claws by Kat Kreuger 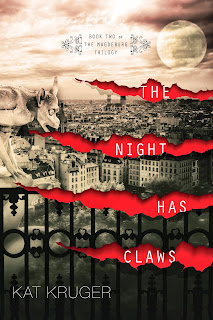 What happens when you’re the thing that goes bump in the night?

Connor Lewis and Arden LaTène are experiencing a reversal of fortunes. Arden, once a prominent werewolf, has been cured against his will. As a result, he’s now considered dead by his former pack and has lost his longtime girlfriend in the mix. Connor, a newly created werewolf whose DNA has inadvertently led to the creation of the cure, now has to make some important decisions about his future and is not sure who to trust. Should he join a pack or try to go it alone?

When Connor is summoned by the Hounds of God to testify against the human scientist who developed the cure, he’s forced to choose sides. Comprised of humans bitten by werewolves, the Hounds have been the lawmakers and enforcers for hundreds of years, ensuring werewolves don’t endanger the lives of humans and exacting justice upon those who do. On the other hand, the pack werewolves have been persecuted for centuries and are seeking to tip the balance of power. Adding to his confusion is Madison Dallaire, the girl Connor has complicated feelings for, who has embarked on a path of corporate espionage.

In the second book of The Magdeburg Trilogy, Connor’s loyalties are pushed to the limits as he faces the challenges of being a modern werewolf caught in the grip of an ancient feud.

THE NIGHT HAS CLAWS starts up right where we ended in THE NIGHT HAS TEETH, with a huge reversal in lives, we now see Connor as a werewolf and Arden has now become human. I can say happily that this book does not fall into the second book problem that many trilogies have of information dumping and just lagging a little bit behind the other books because the story needs a bit of a segue. Kat definitely keeps the surprises coming with this book and really gets you more invested in her story.

I found myself loving the characters that Kat has come up with so much more after this book, what I really loved was the relationship that Connor and Arden strike up. In the beginning they really help each other out (even though Arden is still mad about this change in his life). It was great to get a sense of Connor really learning how to control himself and his urges, he begins to understand more about this new life he has. But with this comes a huge decision for Connor as well, join with a pack (even though he is something different) or try to be out in the world alone. There are many events and secrets to come out that will lead up to Connor's eventual decision.

Interspersed throughout the story are added chapters from Madison's perspective which I really enjoyed, it gives readers a deeper look into her history and how she feels about everything. It was also interesting to see a more scientific approach to the werewolf history, and how these characters were able to become something different when bitten.

Kat also has added in a great amount of humour among all the darkness happening around, many of the characters are very sarcastic and it definitely lightens the mood at the perfect time. This book takes readers more into the Hounds of God group and how they came to be and really leads up to what I can guess is a great series ending.

Thanks to Fierce Ink Press for having me as part of this tour!