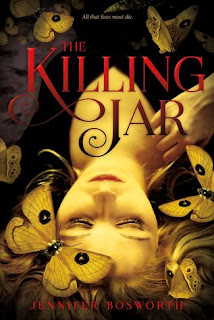 Publisher: Farrar, Straus and Giroux
Pages: 352
Received: Received a copy from Raincoast Books in exchange for an honest review

“I try not to think about it, what I did to that boy.”

Seventeen-year-old Kenna Marsden has a secret.

She’s haunted by a violent tragedy she can’t explain. Kenna’s past has kept people—even her own mother—at a distance for years. Just when she finds a friend who loves her and life begins to improve, she’s plunged into a new nightmare. Her mom and twin sister are attacked, and the dark powers Kenna has struggled to suppress awaken with a vengeance.

On the heels of the assault, Kenna is exiled to a nearby commune, known as Eclipse, to live with a relative she never knew she had. There, she discovers an extraordinary new way of life as she learns who she really is, and the wonders she’s capable of. For the first time, she starts to feel like she belongs somewhere. That her terrible secret makes her beautiful and strong, not dangerous. But the longer she stays at Eclipse, the more she senses there is something malignant lurking underneath it all. And she begins to suspect that her new family has sinister plans for her…

Wow, I was first taken in by the cover of this book, but once I started with this story I could not put it down. Kenna has a secret that has scared her since she was a child, she has a very dangerous power that will harm anyone she comes in contact with. Kenna has spent her life trying to keep this power at bay but when her mother and sister are attacked, this power comes out stronger than anyone could imagine.

Following this outburst, her mother decides that it is time to tell Kenna the truth about her family history, and the things that she learns will change her life forever. The synopsis of this story does not give you a lot to go on, which I actually really enjoyed because I was able to enjoy the book without too much information being given away. And I don't want to spoil this story either with this review... Kenna wants to keep everyone at a distance because she is scared of hurting them, but as time goes on she can't seem to keep her feelings locked away. Then when danger strikes, Kenna must leave those closest to her to learn about this mysterious power, and in the end she must choose between those she loves and those who can truly keep her safe.

Jennifer Bosworth really made this story one that you needed to keep going to understand everything. The secret behind Kenna's power is slowly revealed in pieces, the people at Eclipse don't want to give her everything before they know that she can be trusted, even though as she walks in she is treated almost as family. But the history behind this power is interesting, and something very different which is what I really enjoyed about this story, it's something that I haven't really seen before. She also knew how to hide in some very creepy and disturbing moments that really make you wonder about people and what they would do for certain things.

As the story continues, readers get to understand the strained relationship between Kenna and her mother a little more, but what I really loved was the relationship between Kenna and her twin sister, and how close they are. Kenna truly wants to protect her sister because of the hurt she is already going through, and you can really see the love Kenna has for her sister. As Kenna becomes more comfortable at Eclipse (a place that definitely has an interesting feel to it) she starts to pull away from her family more, but what she discovers not only about herself but Eclipse has a huge impact on her life.

Definitely an amazing story, with a lot of great creepy moments that had me shivering and looking over my shoulders...
Posted by Andrea @ Cozy Up at 6:00 AM