Review: A Dictionary of Mutual Understanding by Jackie Copleton 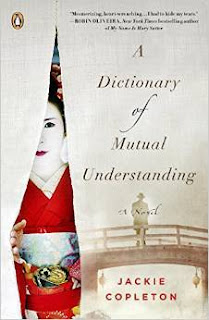 Publisher: Penguin Books
Pages: 304
Received: Received a copy from the publisher through Netgalley

In the tradition of Memoirs of a Geisha and The Piano Teacher, a heart-wrenching debut novel of family, forgiveness, and the exquisite pain of love

When Amaterasu Takahashi opens the door of her Philadelphia home to a badly scarred man claiming to be her grandson, she doesn’t believe him. Her grandson and her daughter, Yuko, perished nearly forty years ago during the bombing of Nagasaki. But the man carries with him a collection of sealed private letters that open a Pandora’s Box of family secrets Ama had sworn to leave behind when she fled Japan. She is forced to confront her memories of the years before the war: of the daughter she tried too hard to protect and the love affair that would drive them apart, and even further back, to the long, sake-pouring nights at a hostess bar where Ama first learned that a soft heart was a dangerous thing. Will Ama allow herself to believe in a miracle?

This was truly an interesting story to me. This is a beautiful story of family overcoming things and forgiving each other for secrets. But it is also a love story between two people who are torn apart from one another for reasons that are not always obvious. After a disastrous time in Japan, a woman loses some people close to her, but even though she believes they died in the bombings, a small part of her never gives up hope of them coming home to her.

What I really enjoyed about this story was the family closeness, how one day someone shows up on Ama's doorstep claiming to be her grandson that was caught in the bombings years ago. Though Ama does not believe this man, she still spends time with him to see if he could be, and in the process she opens up a box of secrets that she always thought would remain hidden. These secrets tell a lot about the past and how it affected the present.

There were a few times where I felt like the story dragged on and I was confused as to what was happening because of the back and forth from past to present. But once my mind focused a little more on the story, I was intrigued to read about a mother who is determined to save her daughter from mistakes that she made in the past as well. Ama confides in this mysterious man because he seems to have many secrets with him that she thought were long gone, and as time goes on Ama begins to believe that this man could actually be her long lost grandson back from the dead.

This is a beautiful story about family secrets that can tear people apart, and yet forgiveness can help bring things back together again as well. Ama has a very soft heart and even though it was what broke her in the past, it can also bring miracles back to her. I truly enjoyed how this book brought about the idea of family being there for each other even in the toughest times and how if you truly believe, maybe miracles can happen...
Posted by Andrea @ Cozy Up at 6:00 AM