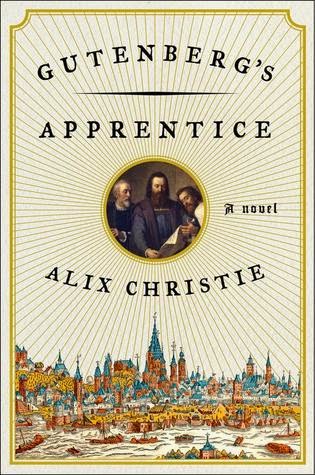 An enthralling literary debut that evokes one of the most momentous events in history, the birth of printing in medieval Germany—a story of invention, intrigue, and betrayal, rich in atmosphere and historical detail, told through the lives of the three men who made it possible.

Youthful, ambitious Peter Schoeffer is on the verge of professional success as a scribe in Paris when his foster father, wealthy merchant and bookseller Johann Fust, summons him home to corrupt, feud-plagued Mainz to meet “a most amazing man.”

Johann Gutenberg, a driven and caustic inventor, has devised a revolutionary—and to some, blasphemous—method of bookmaking: a machine he calls a printing press. Fust is financing Gutenberg’s workshop and he orders Peter, his adopted son, to become Gutenberg’s apprentice. Resentful at having to abandon a prestigious career as a scribe, Peter begins his education in the “darkest art.”

As his skill grows, so, too, does his admiration for Gutenberg and his dedication to their daring venture: copies of the Holy Bible. But mechanical difficulties and the crushing power of the Catholic Church threaten their work. As outside forces align against them, Peter finds himself torn between two father figures: the generous Fust, who saved him from poverty after his mother died; and the brilliant, mercurial Gutenberg, who inspires Peter to achieve his own mastery.

Caught between the genius and the merchant, the old ways and the new, Peter and the men he admires must work together to prevail against overwhelming obstacles—a battle that will change history . . . and irrevocably transform them.

Being a fan of the written word, a book like this is one that needs to be a part of my library. It's great to read a book that is about such a momentous time in history for literature. This book takes place over quite a few years as the birth of printing comes to pass in Germany. This is definitely a long book that I feel readers really need to invest their time to get through because a lot happens, and there is a lot of detail to the history. Christie really knows how to go into intense detail and really bring history to life with this story.

Peter Schoeffer is forced into taking an appprenticeship with Gutenberg as he is on the verge of a new discovery, the printing press. The entire story is told from Peter's perspective as he learns this new art and is taken away from being a scribe, and yet he is moving forward with the times. Peter learns more about Gutenberg and begins to gain a lot of respect for him, he sees the dedication Gutenberg has towards this project and how much he will give up to see it come to fruition.

This book has a little bit of everything to it, there is love but there is also war amongst the group that are trying to make history. The catholic church threatens Gutenberg's work and tries their hardest to stop the venture of making copies of the Holy Bible. Peter is torn between two people, each with a different vision for him, there is his newest mentor, Gutenberg, who inspires Peter to do his own thing and Fust, the one who helped raise him after his mother passed away. These two father figures pull Peter in two directions, not sure of where he should take his life.

I love the fight Peter puts up, at first he doesn't want to be a part of this historic movement, but when he begins to see how great the project is, he wants to devote his life to making this come to. I did have some difficulties getting through at times because to me it felt a bit dry at times. Christie goes into great detail about the time period and really makes readers feel as if they are there, and yet I felt like Christie took a great amount of the story to describe the printing press.

What made this book for me is how the story of this book is still relevant and will always be relevant. There are always going to be people who don't want to grow along with the times and this book takes that into consideration. You can see how people are going to fight against change and the difficulties that arise because of these fights. Honestly, as much as I had difficulties, I believe this is a perfect book for anyone who is a fan of reading, this is history, and you honestly get to feel that you are a part of this history.