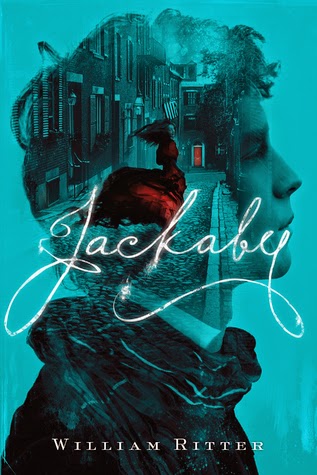 “Miss Rook, I am not an occultist,” Jackaby said. “I have a gift that allows me to see truth where others see the illusion--and there are many illusions. All the world’s a stage, as they say, and I seem to have the only seat in the house with a view behind the curtain.”

Newly arrived in New Fiddleham, New England, 1892, and in need of a job, Abigail Rook meets R. F. Jackaby, an investigator of the unexplained with a keen eye for the extraordinary--including the ability to see supernatural beings. Abigail has a gift for noticing ordinary but important details, which makes her perfect for the position of Jackaby’s assistant. On her first day, Abigail finds herself in the midst of a thrilling case: A serial killer is on the loose. The police are convinced it’s an ordinary villain, but Jackaby is certain it’s a nonhuman creature, whose existence the police--with the exception of a handsome young detective named Charlie Cane--deny.

Doctor Who meets Sherlock in William Ritter’s debut novel, which features a detective of the paranormal as seen through the eyes of his adventurous and intelligent assistant in a tale brimming with cheeky humor and a dose of the macabre.

The fact that a part of the synopsis says this is a Doctor Who meets Sherlock type of novel got my attention right away. How can I say no to anything that is compared with Doctor Who, I had no reason to say no to picking this one up. And in the end I'm glad that it did catch my attention, it was definitely an interesting read to say the least.

I really enjoyed the idea behind this story, there is a great sci-fi aspect to the world that Ritter has created, an unknown murder and the suspect seems to be some supernatural creature. When Abigail meets Jackaby you can tell right away that he is an awkward person. Jackaby definitely has the Sherlock vibe to him, he does not have the greatest social skills but he is aware of so much around him. I loved the dynamic that Jackaby has with everyone around him, it makes the story very light-hearted and yet there is so much darkness still going on.

As soon as Abigail arrives in town you can see that she has something to prove, not only to herself but also her family. The way she works so hard to show Jackaby she can be a help is amazing, I truly loved her perseverance to be Jackaby's assistant. I still want to learn more about Abigail and her family history, you can see that she is hiding a lot of herself and trying to become a new person.

Though as the book finally comes to an end, you can see that Abigail still has quite a lot to learn about Jackaby, and I am excited to see what more William Ritter has for Abigial and Jackaby, I can already tell there are going to be a lot more great supernatural mysteries to come for these two. I think if you are a fan of Sherlock and you like a bit of supernatural elements added in to your pot, then this would be the book for you to check out.