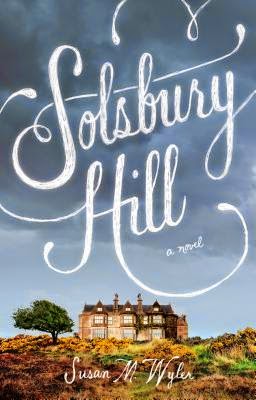 The windswept moors of , a grand rustic estate, and a love story of one woman caught between two men who love her powerfully—all inspired by Emily Bronte’s beloved classic, . Solsbury Hill brings the legend of Catherine and Heathcliff, and that of their mysterious creator herself, into a contemporary love story that unlocks the past.

When a surprise call from a dying aunt brings twenty-something New Yorker Eleanor Abbott to the Yorkshire moors, and the family estate she is about to inherit, she finds a world beyond anything she might have expected. Having left behind an American fiance, here Eleanor meets Meadowscarp MacLeod—a young man who challenges and changes her. Here too she encounters the presence of Bronte herself and discovers a family legacy they may share.

With winds powerful enough to carve stone and bend trees, the moors are another world where time and space work differently. Remanants of the past are just around a craggy, windswept corner. For Eleanor, this means ancestors and a devastating romantic history that bears on her own life, on the history of the novel , and on the destinies of all who live in its shadow.

This book stuck out to me because of it's connection to Wuthering Heights, I really loved that book when I read it years ago. I will say that other than a few little things, this wasn't exactly Wuthering Heights, but there was some great history surrounding the story that leads to the idea of Emily Bronte's famous story.

After a phone call telling her about a dying aunt, Eleanor decides to fly out to see this woman and learn more about not only her history but her family's as well. Eleanor meets many new people and she begins to see her life in a different way as she explores this old family home. Eleanor encounters many secrets that this house holds, and the ghosts that come with those, as you read on you want to find out more about what all the secrets are.

Eleanor was an interesting character at times, though I felt at times that she gave in too easily to certain people. I wanted to see her grow up a little more and take control of her own life, instead of letting other people push her into things. I felt like Eleanor's life really revolved around the men that were in her life, and they were the ones who she bases her decisions on. As the novel moves forward, Eleanor learns that history is something that will often repeat itself and you wonder if this is the time it will change.

The end of this story left me wondering about a few things, the ghosts of the house felt a little unfinished, and even Eleanor's story should have had a bit more of an ending. Though despite all this, I did enjoy the book and was interested in everything that was happening with Eleanor. I think Wyler did a great job of showing how important family history is to someone's life.
Posted by Andrea @ Cozy Up at 7:00 AM