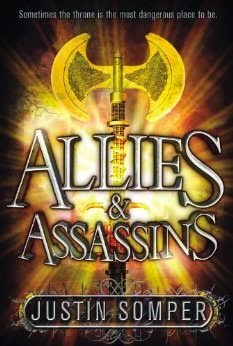 Received: Received a copy from Hachette Book Group in exchange for an honest review

Release Date: May 27, 2014
Buy From Amazon.ca / Buy From Chapters.ca /
Buy From BookDepository.com

Prince Anders, the ruler of Archenfield, has been murdered, leaving his younger brother, Jared, to ascend the throne. Sixteen-year-old Jared feels unprepared to rule the kingdom and its powerful and dangerous court, yet he knows he can rely on the twelve officers of the court to advise him. He also knows he can just as easily be at their mercy-especially when it appears that one of them may be responsible for his brother's death. Unable to trust anyone, Jared takes it upon himself to hunt down his brother's killer-but the killer may be hunting him, as well. Murder, betrayal, and intrigue abound in Justin Somper's thrilling YA series debut. Exploring the political machinations of the medieval court and the lives that hang in the balance, Allies & Assassins is a gripping tale of a teen torn between duty and revenge.

This was such a great read, I really enjoyed everything that was happening, though it was quite long, I was riveted by the mystery of what was happening. After his brother is found murdered, Jared is forced to take over the throne and rule the kingdom, but he is unsure if he is ready for this. Jared has to be aware of everything around him, knowing that he is in danger himself as well.

Not only is this a book about Jared growing and learning to rule the kingdom but it is also a mystery, trying to find out who is behind the murder of his brother. The one thing in this book is that there are many different perspectives, so readers really get a look into not  only what Jared is going through, but what those closest to him feel about the situation as well. It is hard to know who to trust in this story, everyone has a reason to be an enemy.

There are so many characters to follow, that sometimes it gets a bit confusing though they are all important to the story as a whole. It honestly felt a little like an episode of Law & Order as we try to get to the bottom of the murder, along the way there is more danger, and more people falling into trouble. I love how every character has a meaning and contributes to what is happening. It makes the story go by so much faster when you are invested in knowing about everyone, this almost 500 page book goes by fast because there are some chapters that go by quick so you get to know each of the characters better.

The world building is another awesome part of this book, the way Justin Somper describes the kingdom and everything around it really makes readers feel that they are part of this world. The intimate descriptions are what adds to the books length, I believe some of it could have possibly been left out to shorten the book and make it a little more appealing to teens, but at the same time I do feel as that it adds so much to the story that I wouldn't want any of it taken out.

If you like some intrigue with your story this would definitely be the book for you. Justin Somper keeps you guessing to the end to the point where you just want to keep going to really know what is happening. I wonder after everything that happened in this book, what more Justin will bring to his readers with the rest of the series.
Posted by Andrea @ Cozy Up at 7:00 AM