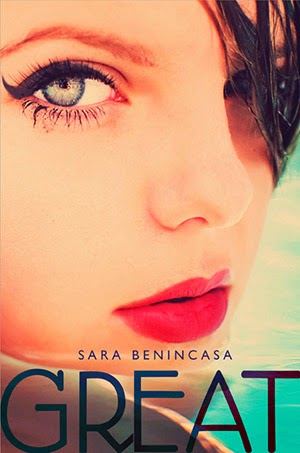 In Sara Benincasa's contemporary retelling of The Great Gatsby, a teenage girl becomes entangled in the drama of a social circle, only to be implicated in a tragedy that shakes the summer community.

Everyone loves a good scandal.

Naomi Rye usually dreads spending the summer with her socialite mother in . This year is no different. She sticks out like a sore thumb among the teenagers who have been summering (a verb only the very rich use) together for years. But Naomi finds herself captivated by her mysterious next-door neighbor, Jacinta. Jacinta has her own reason for drawing close to Naomi-to meet the beautiful and untouchable Delilah Fairweather. But Jacinta's carefully constructed world is hiding something huge, a secret that could undo everything. And Naomi must decide how far she is willing to be pulled into this web of lies and deception before she is unable to escape.

Based on a beloved classic and steeped in Sara Benincasa's darkly comic voice, Great has all the drama, glitz, and romance with a terrific modern (and scandalous) twist to enthrall readers.

So all I have heard about was how this is a retelling of The Great Gatsby, I have sadly not had the chance to read this, but from what I can tell I would definitely enjoy it. This story starts out slow, but there was a certain point where I found myself engrossed in everything that was happening and wanted to see how far Naomi would go to fit into this world.

Naomi is from a different world but every summer is thrown into the Hampton's to spend time with her mother. Every year up until now she has been on the sidelines and never really makes friends or gets into the events going on, until this year when she is pushed to spend time with the most popular girl, Delilah Fairweather. All of a sudden, Naomi's life is completely changed, as the summer goes on, she sees that not everything is as it appears to be. I admit that this was a weird story, and I was shocked at some of the turns it took, but yet it was hard to turn away and I needed to keep reading to see what the characters would do next.

I find Naomi can be a bit naive at times and you can really see that she does not fit into the world of the Hamptons. She believes every thing is perfect, and does not really understand that there are so many layers to the people of this place. The only one that she doesn't see as perfect is her mother. They have a very strained relationship because she sees her mom as someone different, and as the story grows you can see how Naomi does not fit into the life her mom wants for her.

The characters in this book are quite a bit selfish and really full of themselves, making it difficult to really connect with them. A part of me felt that this was a guilty read type book because of the way these girls acted. I did think that it took awhile to get into some really interesting things and by that time it was close to the end, though at the same time it felt like there was some great build up to that ending, which for me ended up being quite emotional. I definitely think Naomi learns a lot about herself and the Hamptons, and she learns that not everything is absolutely perfect and happy all the time.
Posted by Andrea @ Cozy Up at 7:00 AM