Review: Rain of the Ghosts by Greg Weisman 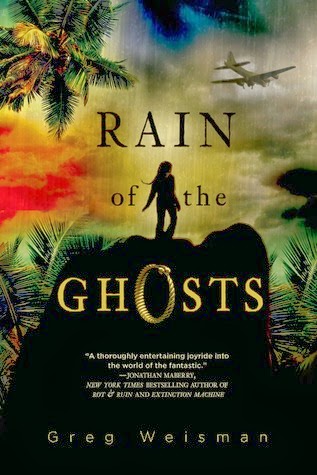 Received: Received a copy from Raincoast in exchange for an honest review

Rain of the Ghosts is the first in Greg Weisman's series about an adventurous young girl, Rain Cacique, who discovers she has a mystery to solve, a mission to complete and, oh, yes, the ability to see ghosts.

Welcome to the Prospero Keys (or as the locals call them: the Ghost Keys), a beautiful chain of tropical islands on the edge of the Bermuda Triangle. Rain Cacique is water-skiing with her two best friends Charlie and Miranda when Rain sees her father waiting for her at the dock. Sebastian Bohique, her maternal grandfather, has passed away. He was the only person who ever made Rain feel special. The only one who believed she could do something important with her life. The only thing she has left to remember him by is the armband he used to wear: two gold snakes intertwined, clasping each other’s tails in their mouths. Only the armband . . . and the gift it brings: Rain can see dead people. Starting with the Dark Man: a ghost determined to reveal the Ghost Keys’ hidden world of mystery and mysticism, intrigue and adventure.

I had a few issues with this story, I can say I was intrigued by the cover and the synopsis but I felt that this story did not completely live up to expectations. I really was taken with the idea that Rain is able to ghosts, and that there is a mystery lurking in the island. I am usually intrigued by ghost stories, and there were times where the book had me interested and wanting to understand more of what was happening, but I think it fell short by the end.

I felt that the characters came off younger than I was expecting them to, and it made the story difficult at times. Rain also seemed to have an attitude that did not sit well with me through this story, the way she acted was like she was better than her friends and it got on my nerves. Her friend Charlie had a weird way about him as well, and I think these characters were not fleshed out enough. In a way, I loved how devoted Charlie was to helping Rain with anything, but at the same time it seemed like that made him very open to being taken advantage of...

The biggest issue I had with this book though was the narration aspect, it is told from the perspective of a completely different character, and it felt disjointed and confusing a lot of the time. It's not defined how this other character knows everything that is going on, or even who this character actually is (until near the end, and even then I was still confused). Then other times I felt that the narration did jump to the view of Charlie or Rain... it just seemed a bit all over the place.

I do think this book is geared towards a younger audience, and I think the series will be interesting as it continues on. There were parts that were intriguing and that will keep some readers coming back to understand more about the mystery behind this island. In the end, the book was too short and things happened to quickly for me to get into the series.
Posted by Andrea @ Cozy Up at 6:00 AM