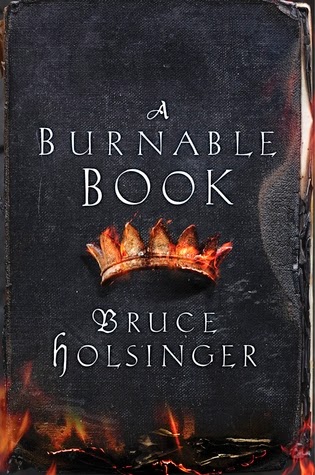 Received: Received a copy from HarperCollins Canada in exchange for an honest review

In Chaucer’s , betrayal, murder and intrigue swirl around the existence of a prophetic book that foretells the deaths of ’s kings.A Burnable Book is an irresistible thriller, reminiscent of classics like An Instance of the Fingerpost, The Name of the Rose and The Crimson Petal and the White.
, 1385. Surrounded by ruthless courtiers—including his powerful uncle, John of Gaunt, and Gaunt’s flamboyant mistress, Katherine Swynford—’s young, still untested king, Richard II, is in mortal peril, and the danger is only beginning. Songs are heard across —catchy verses said to originate from an ancient book that prophesies the end of ’s kings—and among the book’s predictions is Richard’s assassination. Only a few powerful men know that the cryptic lines derive from a “burnable book,” a seditious work that threatens the stability of the realm. To find the manuscript, wily bureaucrat Geoffrey Chaucer turns to fellow poet John Gower, a professional trader in information with connections high and low.

Gower discovers that the book and incriminating evidence about its author have fallen into the unwitting hands of innocents, who will be drawn into a labyrinthine conspiracy that reaches from the king’s court to ’s slums and stews--and potentially implicates his own son. As the intrigue deepens, it becomes clear that Gower, a man with secrets of his own, may be the last hope to save a king from a terrible fate.

Medieval scholar Bruce Holsinger draws on his vast knowledge of the period to add colorful, authentic detail—on everything from poetry and bookbinding to court intrigues and brothels—to this highly entertaining and brilliantly constructed epic literary mystery that brings medieval gloriously to life.

This book was an intense read, I was intrigued by the idea of one simple book being the cause of so much destruction. This one inanimate objects bring so many people together from so many different areas is amazing. This book causes so much trouble, and it's not completely understood what it is or where it came from. The story is a race to find this book before it causes more trouble.

There is a large cast of characters in this book, that in a way are all connected through this mysterious book. I enjoyed the setting and seeing the book move around and how it affects those who have come into contact with it. This book that everyone is looking for tells of prophecies that detail the deaths of past kings, as well as discusses how the current king will die. It is seen as treasonous and if it got into the wrong hands could be fatal. I thought this book was a great read, it was mysterious with some great scenes that keep you wanting to know more about how things came about.

Most of the novel is told from the point of view of John Gower, a friend of Geoffrey Chaucer who is asked to find this offensive book. Gower is the perfect person for this job because of his connections with people, he calls in many favors from some of these people and the outcome is surprising at times. Gower has his own secrets that are slowly revealed, but he is someone who tries to keep those secrets hidden. Gower knows that people are most susceptible when their secrets are known, and that is how he is able to get people to help him throughout the book.

Interspersed throughout the story is a letter, that at first is confusing to the reader and as the story comes to an end, connects everything together bringing out a surprising turn of events. I really loved how Holsinger brought out this story, really stringing things along that makes you want to keep reading to understand the mystery. I enjoyed the thrilling adventure in this book and I definitely want to read more from Holsinger if all his books are like this.
Posted by Andrea @ Cozy Up at 6:00 AM