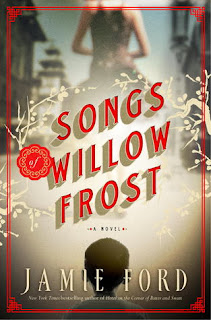 Received: Received a copy from the publisher through Netgalley/Edelweiss

Twelve-year-old William Eng, a Chinese-American boy, has lived at ’s Sacred Heart Orphanage ever since his mother’s listless body was carried away from their small apartment five years ago. On his birthday—or rather, the day the nuns designate as his birthday—William and the other orphans are taken to the historical Moore Theatre, where William glimpses an actress on the silver screen who goes by the name of Willow Frost. Struck by her features, William is convinced that the movie star is his mother, Liu Song.

Determined to find , and prove his mother is still alive, William escapes from Sacred Heart with his friend Charlotte. The pair navigates the streets of , where they must not only survive, but confront the mysteries of William’s past and his connection to the exotic film star. The story of Willow Frost, however, is far more complicated than the fantasy William sees onscreen.

Shifting between the Great Depression and the 1920s, Songs of Willow Frost takes readers on an emotional journey of discovery. Jamie Ford’s sweeping book will resonate with anyone who has ever longed for the comforts of family and a place to call home.

I really loved this story, this is a story about someone wishing for family and a place that they can really call home. William has grown up in an orphanage for the last five years and all he has is these small memories of his mother, but after seeing a woman in a movie, he believes that he knows his mother is alive and is that woman. Along with the story of William finding Willow, we also get Williow's story as she becomes famous and the difficulties she went through.

What really caught my attention in this book was the relationship between William and his friend Charlotte, I loved the way Charlotte pushed William at times, and how she always stood by him. I really loved their interactions and how William would do so much for Charlotte, he runs away because it's what she really wants. Her faith in his belief that Willow Frost is his mother is what keeps William going. These two navigate the streets of Seattle on their own and it is not always a fun time, there are many scary areas at this time

Then we have Willow's story interspersed in parts of the book, this was a difficult part to read, following everything that she had to deal with. But I believe that much of her past shows some of her strength, she loses so much and yet she comes out ahead and works hard to be herself. I found I was more intrigued with Willow's story of her past more than William finding out about his family connections.

I love that this isn't a story about romantic relationships but it's about finding out about your history and learning the things people do for love and to save those most important to them. Jamie Ford really brings out the emotions in this story, you see how William feels not knowing anything about his family and how much he doesn't know about himself because of this. William begins to understand what Willow went through and why her life has changed so much and what she had to do. This is definitely a beautiful story about surviving through tough times and really knowing about family and finding a place that is home.
Posted by Andrea @ Cozy Up at 6:00 AM