Review: The Cartographer of No Man's Land by P.S Duffy 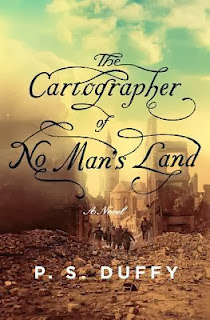 Received: Received a copy from the publisher through Netgalley/Edelweiss

When his beloved brother-in-law goes missing at the Front in 1916, Angus defies his pacifist upbringing to join the war and find him. Assured a position as a cartographer in , he arrives overseas and is instead sent directly into the trenches, where he experiences the visceral shock of battle. Meanwhile, at home, his son Simon Peter must navigate escalating hostility in a fishing village torn by grief and a rising suspicion of anyone who expresses less than patriotic enthusiasm for the war. With the intimacy of The Song of Achilles and the epic scope of The Invisible Bridge, The Cartographer of No Man’s Land offers a lyrical and lasting portrayal of the First World War and the lives that were forever changed by it, both on the battlefield and at home.

As I've made obvious in the past, I am such a huge fan of historical fiction books, but I feel that so many of them are about the same time periods, and are all very similar. I can happily say that The Cartographer of No Man's Land is different. This story revisits the Canadians part in World War I and the battle at Vimy Ridge, but what I really think brings this story to the forefront is the way that it shows both sides of a man at war and the family he has left behind.

P.S. Duffy has a very detailed and imaginative story here, Angus decides to go off to the war to help find out about his brother-in-law, who has gone missing in action. He believes he will be behind the lines drawing maps but is instead placed into the trenches where his whole life changes as he must deal with being in the heart of the battle. I really loved reading about Angus' progress as he tries to find the one person who has made such a difference on his life, and as he meets all these new people that change his life.

It was also interesting to see what happened to those that were left behind and how they dealt with being alone. Angus' son Simon Peter has a very difficult time back home as people are becoming restless and anyone with the wrong view is under suspicion. Everyone has to be careful about who they discuss their thoughts with, and Simon Peter is a very trusting person. He becomes close with his teacher who has a different view on the war and how those left back should act with one another.

I will say I was more intrigued by the sections of Angus as he fights to find any information about his brother-in-law. His main reason for going is to help bring his wife some good news because of how close they are with one another. He defies his pacifist father and their relationship becomes more strained, as well as the relationship between Simon Peter and his grandfather.

This is a beautiful book about how the war changed people both there and at home and the way people had to learn to live on their own. There are many amazing secondary characters that Angus meets while in the war that really test his own faith in things and push him to work harder. I had a few troubles along the way where I felt like the story was taking a bit of time to get somewhere, but in the end I think it all worked perfectly to tell a great story.
Posted by Andrea @ Cozy Up at 6:00 AM