Review: The Secrets She Carried by Barbara Davis 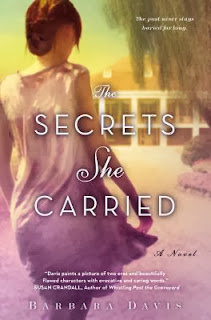 When a young woman returns to after a thirty-year absence, she finds that the once grand tobacco plantation she called home holds more secrets than she ever imagined.

Though Peak Plantation has been in her family for generations, Leslie Nichols can’t wait to rid herself of the farm left to her by her estranged grandmother Maggie—and with it the disturbing memories of her mother’s death, her father’s disgrace, and her unhappy childhood. But Leslie isn’t the only one with a claim to Peak.

Jay Davenport, Peak’s reclusive caretaker, has his own reasons for holding onto the land bequeathed to him by Leslie’s grandmother. Before she died, Maggie hinted at a terrible secret surrounding Adele Laveau, a lady’s maid who came to Peak during the 1930s and died under mysterious circumstances. Jay is haunted by Maggie’s story, yet the truth eludes him—until Leslie uncovers a cryptically marked grave on the property.

As they delve into the mystery of Adele’s death, Leslie and Jay discover shocking secrets that extend deep into the roots of Leslie’s family tree—secrets that have the power to alter her life forever.

I love books that revolve around family secrets, I find it is always interesting and really shows that at times it shows you a different side to people. This book was all about people carrying secrets and how those secrets affected their past and present lives.

The story goes back and forth between two different stories, the story of Leslie Nichols, who has returned home after being gone for almost 30 years. The other story is Adele's, and eventually these two stories start coming together and we learn more about the history of Peak Plantation. I was really intrigued by Adele's story and found myself enjoying that one much more than Leslie's. I loved Adele's character and I find she really grows up a lot in the novel and tries to get through the mistakes made in her life.

I did feel for Leslie throughout the book as well though, she has dealt with a lot in her life and ends up as an adult with a lot of trust issues (especially when it comes to men). I really like that as she learns more about the history of the Peak, and the many secrets surrounding it, she learns a lot about herself, and slowly she learns how to forgive. I really enjoyed her relationship with Jay and how they help one another out and learn to really open up and live again.

As much as I liked Jay, his story was a little far-fetched for me, I wanted a little more development from him because he is such a big character in the book. I found that when Leslie's father makes an appearance he really overshadowed Jay (maybe the author intended this to happen though...) I think the best part of this book for me was the whole family secret (which is very easy to figure out early on, but it's nice to see the way that it is discovered). I liked that the romance aspect of the book was really on the side compared to learning about the Plantation, I am a huge fan of family books and I definitely think this one is a beautiful family story.
Posted by Andrea @ Cozy Up at 6:00 AM