Review: The Rules for Disappearing by Ashley Elston 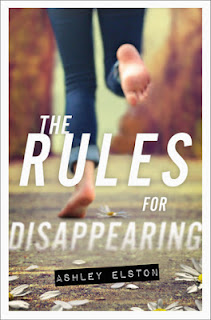 Release Date: May 14, 2013
Buy From Amazon.ca / Buy From Chapters.ca /
Buy From BookDepository.com

She’s been six different people in six different places: Madeline in Ohio, Isabelle in Missouri, Olivia in Kentucky . . . But now that she’s been transplanted to rural Louisiana, she has decided that this fake identity will be her last.

Witness Protection has taken nearly everything from her. But for now, they’ve given her a new name, Megan Rose Jones, and a horrible hair color. For the past eight months, Meg has begged her father to answer one question: What on earth did he do – or see – that landed them in this god-awful mess? Meg has just about had it with all the Suits’ rules — and her dad’s silence. If he won’t help, it’s time she got some answers for herself.

But Meg isn’t counting on Ethan Landry, an adorable Louisiana farm boy who’s too smart for his own good. He knows Meg is hiding something big. And it just might get both of them killed. As they embark on a perilous journey to free her family once and for all, Meg discovers that there’s only one rule that really matters — survival.

I'm not completely sure what to think of this book, I've had some time to really look back on what I read, and I can say I was definitely interested in everything that happened, and yet I think there was something a little more I needed. There was an interesting mystery, and yet at the same time I could see something along those lines coming.

Ashley Elston really goes into detail of how so many different moves and name changes can really affect not only one person but how it affects relationships in the family. After so many moves, Meg is the one who has to take care of everyone, her father barely acknowledges her and her sister, and her mother has become an alcoholic. I really enjoyed the relationship between Meg and her sister, she is the only one that her sister really trusts. I felt really bad, watching as her little sister reverts back to needing almost everything done for her and always being scared. This story really shows off how traumatic it can be for people going into Witness Protection.

The mystery of what got Meg and her family into Witness Protection was really interesting, but at a certain point in the book, you can tell the direction that the story will go in. Though there was some good lead up to what happened. Meg works hard to figure out what has kept them running and she will do anything to finally end it. Her character is strong, but at times I felt that she needed to make up her mind what she wanted. I understand that she has this list of rules for herself so she doesn't become too attached, but it's like she forgets them the next minute.

The relationship part of the story was not that interesting to me, but I did love Ethan's character. He was always around to help out no matter how often Meg pushed him away. He was a really sweet guy and it did make me love him a little more.

Despite my few issues, I really enjoyed reading this book, there is a great build up to what happened and I didn't feel like the ending happened too fast (which I find can happen in YA mysteries.) The ending is left open so I wonder if there will be more of Ethan and Meg in the future (but I hope not, for me it ended perfectly, leaving readers with a question).