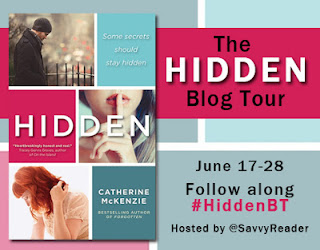 Today as a part of the blog tour for the book HIDDEN by Catherine McKenzie, I have the pleasure of having an interview with her! Thank you so much for being here today :)


This book has a different tone from your other stories. What made you choose this topic to write about?

Like all of my books, it's really just about the story that comes to me. I did want to push myself as a writer with this one, and by that I mean, challenge myself with things like multiple narrators to see if I could do it. Hopefully I pulled it off! I wasn't really going for a completely different tone. I see it more as an evolution for me as a writer, with each book, hopefully, getting better.

Whose voice was the most difficult for you to write? Whose story was the easiest to write?

I think Jeff was the most challenging in a way but also the easiest if that makes sense. I was nervous writing from the male point of view; what if I got it totally wrong? But his was also the first voice that came to me when I thought up the book, and because his chapters are generally lighter in tone that the others, they were easier to write.

Do you identify with any of the characters in HIDDEN?

I identify with all the characters in my books in one way or another. Oh, I know that sounds like a cop-out! What I mean is, writing a character means you have to inhabit them, see things from their point of view, so even if you disagree with their voices, you know why they made (and hopefully the audience understands too).

What is your favourite book and why?

I love so many books, but my all time favourite is probably Pride & Prejudice. Again with the cliche, right? But honestly, it's so sharp whited, so tightly told. Every character in the book is fully realized. As to my current favourite book, anyone who follows me knows I've been shouting about The Banks of Certain Rivers by Jon Harrison from the rooftops; I really think the book is kind of a master class for anyone writing in contemporary fiction these days, but also, just a great read.

What advice do you have for someone trying to become a writer?

Write, write, write and then write some more. Get some honest, third party advice. If one person tells you something needs to be fixed in your book, consider it seriously. If two people say the same thing, they are right and you are wrong.
Posted by Andrea @ Cozy Up at 6:00 AM