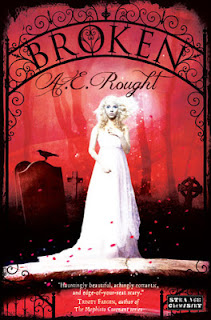 Pages: 384
Received: Received a copy from the publisher through NetGalley

Imagine a modern spin on Mary Shelley’s Frankenstein where a young couple’s undying love and the grief of a father pushed beyond sanity could spell the destruction of them all.

A string of suspicious deaths near a small Michigan town ends with a fall that claims the life of Emma Gentry's boyfriend, Daniel. Emma is broken, a hollow shell mechanically moving through her days. She and Daniel had been made for each other, complete only when they were together. Now she restlessly wanders the town in the late Fall gloom, haunting the cemetery and its white-marbled tombs, feeling Daniel everywhere, his spectre in the moonlight and the fog.

When she encounters newcomer Alex Franks, only son of a renowned widowed surgeon, she's intrigued despite herself. He's an enigma, melting into shadows, preferring to keep to himself. But he is as drawn to her as she is to him. He is strangely... familiar. From the way he knows how to open her locker when it sticks, to the nickname she shared only with Daniel, even his hazel eyes with brown flecks are just like Daniel's.

The closer they become, though, the more something inside her screams there's something very wrong with Alex Franks. And when Emma stumbles across a grotesque and terrifying menagerie of mangled but living animals within the walls of the Franks' estate, creatures she surely knows must have died from their injuries, she knows.

I am always interested in retellings because I've had such good luck with them, and Frankenstein is such an interesting story I really wanted to read a modern day novel to see how it could be done. The cover of this is what first caught my attention, I love the colour contrast, I found my eye being drawn to it and that's a great marketing strategy.

I think Rought had an interesting story here, but I was disappointed to find that I knew everything that was happening (this book has the case of the synopsis giving away the entire book!) It ruined a lot of the story for me because nothing was surprising, and I just wanted to get to where Emma finds out about Alex and Daniel. I will say that though a lot was given away in the synopsis, there was still a good amount of things added in that made the book an interesting read.

I felt that even though I knew what was happening, Rought was still able to add in a great creepiness factor to the story. I really enjoyed her writing style for the most part, as she explained what happened, I felt myself cringing quite often, even knowing what was coming. Rought also added an interesting twist to how everything was acquired to make "the monster". Rought's writing style was quite descriptive, and at times I felt that it was taking away from the story, there was a lot of information to what Emma wears, everything she does, and every text she receives. I just wanted more of a story and a bit more to the actual characters.

I was really surprised at the romantic aspect of the story, I found there was a lot more romance than I was expecting from a story like this. I thought this actually added to the story though, I'm not a fan of the insta-romance in books for the most part but there is a reason behind the instant attraction. I really enjoyed the dynamic between Alex and Emma, because Emma is a strong character that fights back and she has this attitude with most of the guys (including Alex at times).

The ending did a great job of tying the whole story up, but what I really loved about was how intense it got. I wasn't the most interested in the story because I knew everything but the last few chapters were interesting and gripping. I will say that the ending made the book a better read for me and I am glad that I finished reading it because I enjoyed watching Emma and Alex deal with some of their issues.

Though there were interesting parts of the book, there was just too much that took away from the story for me. I can see readers enjoying this one if they pick it up and don't read about it, but other than that, there is just too much that is told to the reader that gives away the entire story.
Posted by Andrea @ Cozy Up at 8:00 AM