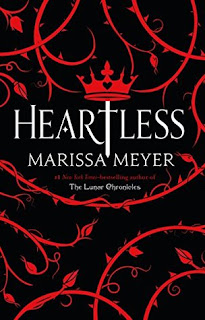 Publisher: Feiwel and Friends
Pages: 464
Received: Received a copy from Raincoast Books in exchange for an honest review

Long before she was the terror of Wonderland—the infamous Queen of Hearts—she was just a girl who wanted to fall in love.

Catherine may be one of the most desired girls in Wonderland, and a favorite of the unmarried King of Hearts, but her interests lie elsewhere. A talented baker, all she wants is to open a shop with her best friend. But according to her mother, such a goal is unthinkable for the young woman who could be the next queen.

Then Cath meets Jest, the handsome and mysterious court joker. For the first time, she feels the pull of true attraction. At the risk of offending the king and infuriating her parents, she and Jest enter into an intense, secret courtship. Cath is determined to define her own destiny and fall in love on her terms. But in a land thriving with magic, madness, and monsters, fate has other plans.

In her first stand-alone teen novel, the New York Times-bestselling author dazzles us with a prequel to Alice's Adventures in Wonderland.

First off I would love to thank Raincoast Books for allowing me to be a part of this tour. Marissa Meyer is such an amazing storyteller and I am so glad to be able to shout out from the rooftops how amazing her books are!! The cover of this book is so different from what is out there lately, it's so simple and yet very effective of drawing people in.

Now on to the review... what to say about this book, it is amazing with characters that are truly brought to life. You don't need to have read Alice in Wonderland to know anything about this book, it is a great introduction to the story though. Everyone always wondered how The Queen of Hearts got to be how she is, well Marissa really brings her story to light and shows that at one time she was just a girl who wanted to fall in love and she had dreams of her own.

Cath has big dreams of becoming a baker and opening her own store but her family has other ideas for her, and poor Cath has trouble fighting for what she really wants if that means disappointing her parents. Cath's parents are quite interesting secondary characters, they are polar opposites, her mother is a very opinionated person who takes over and forces Cath's hand in certain situations, whereas her father is the one who shows affection but is very quiet and withdrawn. It is understandable to see where Cath comes from to see who she is younger and who she becomes as well.

I can absolutely say that while reading this book, even though knowing how things would end for Cath, I still had hope that everything would change and she would get everything that she wished for so that she could truly live happily ever after. Marissa Meyer's writing makes you forget about the story that you already know and love and it feels like a completely different story that you hold out hope for all the characters to find what they are looking for.

Just like Alice in Wonderland, this book has all the fun and magic to it with the darkness hiding underneath everything, you can see how the darkness and terror of Wonderland is truly unleashed and why it becomes what we all know it as. I actually adored the King of Hearts in this book though, he is quirky and shy and he stumbles to let how he feels be known, I truly did imagine the cartoon version of him throughout the book and it made me love him that much more.

Then we have the Jest, and what a character he is, he truly brings out the best in Cath, and helps her realize how strong she can be. Jest is someone that I fell in love with right away, he has an air of mystery about him but he is fun and witty as well. And his role in this book is a huge one, I don't think Cath would be who she is, or would she turn into what we know her as The Queen of Hearts if it wasn't for Jest.

For those who love the classic Alice in Wonderland or even for those readers who don't know it but are always looking for adventure and magic, Marissa Meyer delivers for all in her newest book!!!

Check out the other blogs on this tour as well!! 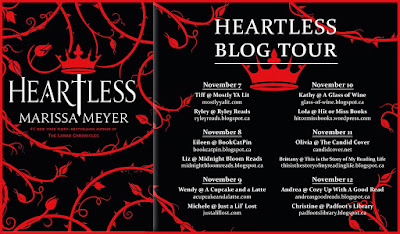 I am lucky enough to be able to show you a little more about Cath's father The Marquess, as well. The Marquess is known through the land for his amazing storytelling abilities, it is a skill that sadly does not get passed down to his daughter (though she does have other amazing skills). Readers can just imagine a sparkle in his eye as he tells his stories and revels audiences with them.

“That is hardly an excuse. You know now. You knew today. I am marvelously disappointed, Catherine. I know you can do better than this.”
Cath looked at her father, hoping for defense. “Is this how you feel too?”
He turned his head up, the slices of roast beef and pumpkin on his plate already three-quarters eaten. His expression, though bewildered at first, quickly softened, and he reached for Cath, settling his hand on her wrist.
“Of course, dear,” he said. “You can do anything you put your mind to.”
Cath sighed. “Thanks, Papa.”
He gave her a loving pat before returning his attention to his plate. Shifting in her seat, Cath resigned herself to her mother’s disappointment and focused on cutting her meat into very tiny pieces.
“I was so hopeful for those macarons too,” the Marchioness continued. “I realize it isn’t ladylike to slave away in the kitchen all day, but he does fancy your desserts and I thought, once he tastes them, he’ll remember why he meant to propose in the first place. How could you have failed at such a simple task?” She scowled at Catherine’s plate. “You’ve eaten enough now, Catherine.”
Catherine looked up. At her mother’s twisted mouth, at the top of her father’s lowered head, at Mary Ann and Abigail pretending to not be listening. She set down her knife and fork. “Yes, Mother.”
With a snap of her mother’s fingers, the plates were taken away, even her father’s, though he was still clutching his fork. He soon slumped with resignation.
Before the awkwardness could stretch on, the Marquess perked up. “I heard the most delightful tale at the party today,” he said, dabbing his napkin at the corners of his mustache, “about a little girl who discovered an upward-falling rabbit hole just off the Crossroads, and when she started to climb, her body fell up and up and—”
“Not now, dear,” said his wife. “Can’t you see we’re discussing our daughter’s prospects?” Then she grumbled, “If she has any left at all, that is.”
The Marquess deflated, and set his napkin on the table. “Of course, my dear. You always know just the right thing to talk about.”
Posted by Andrea @ Cozy Up at 10:05 AM