Review: A Robot in the Garden by Deborah Install 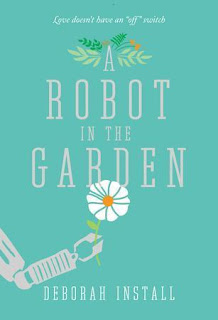 Funny, touching, charming, wise and a bit magical, this is a novel that explores what it is to be a man, a sentient being and even a parent. A Robot in the Garden is a gem of a first novel, perfect for anyone who has ever found it difficult to connect with the world.

What would you do if you found a robot in your back garden? For 34-year-old Ben Chambers the answer is obvious: find out where it came from and return it home, even if it means losing his wife in the process. Determined to achieve something for once in his life, Ben embarks on a journey that takes him and the endearing robot, Tang, to the far side of the globe...and back again. Along the way Ben begins to change, subtly at first, and then in ways that only become clear on his return to the house he's always lived in.

Oh my gosh, I did not expect to love this book as much as I did, as soon as I finished it, I started passing it around because I thought that everyone I knew needed to have the same experience I did with a story. Honestly, I could not stop reading, I'm pretty sure once I started I read for a few hours straight, and before I knew it the story was over... I was actually sad to have it end as soon as it did, but Deborah Install definitely knew how to keep someone reading.

When Ben wakes up one morning and finds a robot sitting in his backyard garden, it spurs him on a quest to find out where this guy came from and how he got here. Ben wants to return this robot to it's owner and have him repaired before he fully shuts down. It has been awhile since Ben has truly done something worthwhile and his life is falling apart, but this robot who refuses to leave Ben's side brings out another part of Ben that has been hidden for years.

What was amazing about this story was the relationship that grows between Ben and Tang as they travel the world looking for Tang's home, but also learning more about robots in general. Their relationship is what keeps the story going, Tang learns from Ben and his intelligence grows exponentially over the time they spend together. Tang is like a child who learns from those around him, but is also scared of the newer robots because he doesn't understand them and think they are better than him. Tang really helps Ben learn a lot about himself and he grows up on his travels as he learns to take care of someone other than himself and learns to truly love and care for someone that just came out of nowhere.

Everything about this book was absolutely adorable and as I continued to read, I wanted a Tang for myself. This robot learned to love Ben and Tang taught Ben to see that he needed to move on with his life and not let grief overtake him. The adventures that these two go on bring them closer and Ben learns that he can help others.

Honestly, this book made me laugh and cry in such a short period of time. I refused to put this book down, I wanted to continue the journey with these two characters, I fell in love instantly with the story and I was sad when things ended. I truly wanted more of Tang and Ben, but I know that the most important stuff happens at the beginning of the relationship. This book was such an amazing read and I hope everyone loves it as much as I did!!!