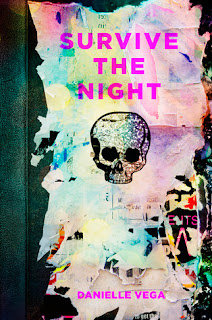 Publisher: Razorbill
Pages: 263
Received: Received a copy from Penguin Canada in exchange for an honest review

Julie lies dead and disemboweled in a dank, black subway tunnel, red-eyed rats nibbling at her fingers. Her friends think she’s just off with some guy—no one could hear her getting torn apart over the sound of pulsing music.

In a tunnel nearby, Casey regrets coming to Survive the Night, the all-night underground rave in the New York City subway. Her best friend Shana talked her into it, even though Casey just got out of rehab. Alone and lost in the dark, creepy tunnels, Casey doesn’t think Survive the Night could get any worse . . .

. . . until she comes across Julie’s body, and the party turns deadly.

Desperate for help, Casey and her friends find themselves running through the putrid subway system, searching for a way out. But every manhole is sealed shut, and every noise echoes eerily in the dark, reminding them they’re not alone.

Trapped underground with someone—or something—out to get them, Casey can’t help but listen to her friend’s terrified refrain: “We’re all gonna die down here. . . .” in this bone-chilling sophmore novel by the acclaimed author of The Merciless.

I've heard a lot of interesting things about Danielle Vega's writing style so I thought I should check it out myself. This was definitely a quick read, it's a small book that seems to go by fast and before you know it, you've finished the story. Vega brings out a creepy story for sure, but I found that this was a bit short and that there needed to be a bit more depth to the story.

Casey has just gotten out of rehab and is taken right back into this dark world with her so-called friends. These kids have gotten themselves trapped underground for this party "Survive the Night", the creepiest things are hidden in the sewers and Casey and her friends must race to get out alive. I can definitely say that this book creeped me out quite a bit, Vega brings out creatures that made me want to close the book and had me shivering imagining them coming at me.

Things begin to happen faster and faster as this group of teens try to get out of the sewers, and every escape plan is thwarted. I'm not too sure how to talk about the book, it was a great story, but for me at times it seemed that it was a little short and that it was over before things even got started. But I will say the ending really threw me, and you just have to read it to find out.

I really felt that I didn't get to spend enough time with the characters to really learn about them, I'm not sure how much character development there was (but I don't think it's the type of story that focuses on that aspect at all). I can see Casey learning about how she got herself in trouble and that her friends may not be the most perfect people around.

Definitely an intriguing story at times, and a good read for a bit of a scare for some readers. I say give it a try and see what you think. It's not necessarily at the top of my list but I will remember this book.