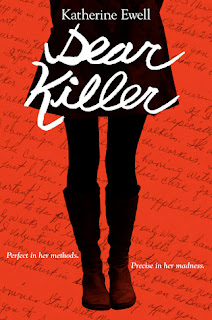 Rule One—Nothing is right, nothing is wrong.
Rule Two—Be careful.
Rule Three—Fight using your legs whenever possible, because they’re the strongest part of your body. Your arms are the weakest.
Rule Four—Hit to kill. The first blow should be the last, if at all possible.
Rule Five—The letters are the law.

Kit takes her role as London’s notorious “Perfect Killer” seriously. The letters and cash that come to her via a secret mailbox are not a game; choosing who to kill is not an impulse decision. Every letter she receives begins with “Dear Killer,” and every time Kit murders, she leaves a letter with the dead body. Her moral nihilism and thus her murders are a way of life—the only way of life she has ever known.

But when a letter appears in the mailbox that will have the power to topple Kit’s convictions as perfectly as she commits her murders, she must make a decision: follow the only rules she has ever known, or challenge Rule One, and go from there.

Katherine Ewell’s Dear Killer is a sinister psychological thriller that explores the thin line between good and evil, and the messiness of that inevitable moment when life contradicts everything you believe.

This book was so enthralling, Katherine Ewell brings out a character very much like Dexter for a younger audience. Kit is very serious about her "job" as the Perfect Killer, she has a strict set of rules that she follows and she never strays from what she has been taught. There is no right or wrong for Kit, she receives a letter and then she follows her path, it is simple and all she knows, then all of a sudden she gets a letter that throws everything out the window and brings Kit into a difficult situation.

Kit's whole world comes crashing down around her with this one letter, something hits too close to home and yet Kit needs to stick to what she has known her whole life. All of a sudden Kit needs to figure out, does she stick to the rules or is there more grey than she thought in all this. For a book for teens this one really hit the mark, it is defintiely a great psychological thriller where readers really get to see into the mind of the killer and get an idea of what possess this person, for me this really set this book apart from others.

As the book continues on, it seems that Kit gets herself deeper into this disaster and she starts to learn a lot more about herself and begins questioning everything she has been taught. In this way it is a great coming of age novel with a big twist on the thriller aspect, in truth when teenagers hit a certain age they question what they have been taught as children and Kit truly delves deep into this transition.

I really think that Katherine Ewell hits on some great real life issues like teenagers having a crisis of figuring out who they are in the world and the mess that comes along with all these questions. The whole story just takes on such a different level of messiness because of the large scale situation Kit gets herself into. This book will definitely take readers for a ride and brings up the idea that not everything is black and white, there is always that middle ground that gets missed (though this story may be a bit far-fetched, it works really well). I can honestly say I was hooked with this book and needed to see how Kit would get herself out of the situation as she gets closer and closer to the problem.