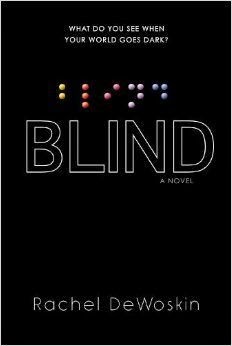 When Emma Sasha Silver loses her eyesight in a nightmare accident, she must relearn everything from walking across the street to recognizing her own sisters to imagining colors. One of seven children, Emma used to be the invisible kid, but now it seems everyone is watching her. And just as she's about to start high school and try to recover her friendships and former life, one of her classmates is found dead in an apparent suicide. Fifteen and blind, Emma has to untangle what happened and why - in order to see for herself what makes life worth living.

Unflinching in its portrayal of Emma's darkest days, yet full of hope and humor, Rachel DeWoskin's brilliant Blind is one of those rare books that utterly absorbs the listener into the life and experience
of another.

The synopsis of this story had me a little interested, but sadly I don't think that this book lived up to my expectations. I really thought this book was going to be a lot about learning how to change your life after being blinded and the hardships that come along with it. And yes, this story definitely did add in those elements, but there was a lot more to Emma's story that I felt took away from what I was expecting.

This story takes place a year after Emma has an accident that leaves her completely blind, and she is now acclimating herself back into a normal school. It has been a year since she has seen many of these people and she has to get used to being at her old school and being around these people that she doesn't know anymore. Something happens at the very beginning of the book that makes Emma take a look at her life and she sees that things could possibly be worse. This story has a lot of hope to it, Emma really tries to bring people together so that they can talk through things with one another. I love the idea of bringing a group of friends together to talk through problems, she wants everyone to be in a place of no judgement where they can feel free to say what they want.

What I didn't like was how long it took to get to Emma's story, you don't really find out what exactly happens to her until a little later on. I was thinking that this was going to be more of a story of her right after the accident but it is later on, and she is still dealing with her problems but we only really see her most difficult times in flashbacks, I think I just wanted more of Emma's struggles (yes she still has a lot of struggles trying to acclimate herself to regular society). Emma was very focused on her self and it really came out, her actions made her seem very immature. In the beginning readers see Emma focused on what her crush will think of her and things like that, I wanted to see a bit more of her struggles (those come a little later on).

Honestly, there was a lot of good things about this book, it is very realistic and brings the readers into the experience of another person, listening to their voice, but I think this just didn't get everything in that would make this book as good as it could have been. I am glad I stuck with the story and kept reading because DeWoskin does get into more important things, it just takes some time.