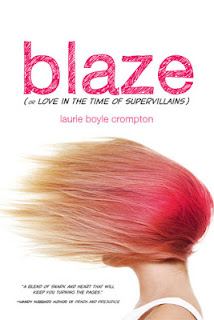 Pages: 309
Received: Received a copy from Raincoast Books in exchange for an honest review

Blaze is tired of spending her life on the sidelines.

All she wants is for Mark the Soccer Stud to notice her. Not as Josh's weird sister who drives a turd-brown minivan. And not as that nerdy girl who draws comics.

What she gets is her very own arch-nemesis.

Mark may have humiliated Blaze supervillian-style, but what he doesn't know is how geek girls always get revenge.

So I admit I am a total geek, and I always have been so when I read about this book I thought it sounded awesome (even though I'm not a comic book geek...) I really loved everything that went down in this book. I found myself really connecting with Blaze, when I was in high school I was the geek on the sidelines who had no idea how to talk to guys and more than once I made a fool of myself with guys (so I ended up sticking with my books more often than not).  I loved being able to really know how Blaze feels, it's not often that I really see a character like her in books, and I found myself wanting her to come out on top!

The humour in this book is something that kept my attention, it's not a humour I see often. Blaze has this snarky attitude to her that really keeps things light hearted. I really loved the interactions between Blaze and her brother and his friends, it was adorable and you could see that even though Blaze had this amusing snark she really cared for these characters. Family is such a huge part in this novel, we find out that Blaze's father left when she was young and she has become a second mother to her little brother while her own mother works long hours.

I loved the relationship between Blaze and her brother, it was adorable and they always had such great interactions. I loved how you see him grow up during the span of this book (even though it's only a couple months). Even though he is a younger brother, Josh is there to help take care of his sister, and I just loved the stuff that he does for her. It was great to see each of them doing things to protect the other one without either of them knowing what is happening.

I did find that it took some time for the big thing to happen and then it was just like everything spiralled out of control from there. But the book felt so realistic and Crompton really brought out emotions I've had from seeing people go through these things. I really hated reading as Blaze was humiliated from something that was not her fault at all, and even having friends rally around you doesn't always help.

This book was beautiful and really meaningful, and I think it's one that everyone really should read. I am disappointed that by reading the ARC, I missed out on some beautiful artwork that goes along with it, but the story itself was so captivating. I loved the way Crompton added in comics to the story and how Blaze felt that she was in her own superhero story. This is definitely a story that will stick with you.
Posted by Andrea @ Cozy Up at 12:10 PM