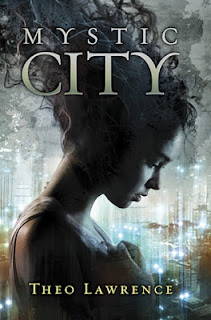 For fans of  Matched, The Hunger Games, X-Men, and Blade Runner comes a tale of a magical city divided, a political rebellion ignited, and a love that was meant to last forever. Book One of the Mystic City Novels.

Aria Rose, youngest scion of one of Mystic City's two ruling rival families, finds herself betrothed to Thomas Foster, the son of her parents' sworn enemies. The union of the two will end the generations-long political feud—and unite all those living in the Aeries, the privileged upper reaches of the city, against the banished mystics who dwell below in the Depths. But Aria doesn't remember falling in love with Thomas; in fact, she wakes one day with huge gaps in her memory. And she can't conceive why her parents would have agreed to unite with the Fosters in the first place. Only when Aria meets Hunter, a gorgeous rebel mystic from the Depths, does she start to have glimmers of recollection—and to understand that he holds the key to unlocking her past. The choices she makes can save or doom the city—including herself.

From the opening of this book I was hooked, the prologue definitely grabs readers attention. My first thought was... THIS is how you start a book. It is such an intense opening scene and leaves you needing to know more about what is happening. There is a huge mystery aspect to this novel involving Aria and her memories, I could see where the story was going with the memories as we slowly watch Aria begin to remember.The air of mystery behind each of the characters (who they are and what they really want) and what happened to Aria really keeps you invested in the story as well.

There was so much happening throughout this book that at times it was hard to wrap my head around everything. I liked the aspect of magic throughout this story. There are certain people that have magic (known as the mystics) and everyone is scared of what they will do to those without the powers, so magic is used to power the city. But there is more to the story, there is an politic aspect in the background of the story, and we are watching as the non-mystics attempt to join forces against the mystics.

I do admit that I wasn't the biggest fan of Aria, for a main character I found her getting on my nerves at times. Though later on in the book when she started figuring things out I became to like her a little more, she's just one of those characters that it takes time for them to grow on you.

My favourite part of this book was the ending, there is this huge fight scene that gets quite disturbing at points. But throughout you can't stop reading because it's the one thing that you are really waiting for throughout the book and it definitely is awesome. You get your fix of action in this one scene (not that there isn't some action throughout other parts of the book).

I was so excited for this book because it just sounded so interesting (disregard the idea that it is all those books mixed in one, this book is all it's own), and I have to say that it definitely delivered. I suggest checking this one out for those who are a fan of dystopians with some magic involved as well.
Posted by Andrea @ Cozy Up at 8:00 AM