Review: A Girl is A Half-Formed Thing by Eimear McBride 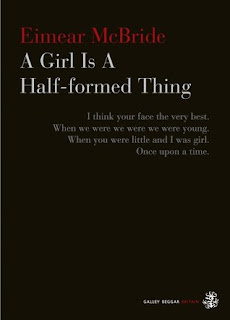 Publisher: Hogarth
Pages: 205
Received: Received a copy from the publisher through Netgalley

Eimear McBride's debut tells, with astonishing insight and in brutal detail, the story of a young woman's relationship with her brother, and the long shadow cast by his childhood brain tumour. Not so much a stream of consciousness, as an unconscious railing against a life that makes little sense, and a shocking and intimate insight into the thoughts, feelings and chaotic sexuality of a vulnerable and isolated protagonist, to read A Girl Is A Half-Formed Thing is to plunge inside its narrator's head, experiencing her world first-hand. This isn't always comfortable - but it is always a revelation.

Touching on everything from family violence to sexuality and the personal struggle to remain intact in times of intense trauma, McBride writes with singular intensity, acute sensitivity and mordant wit. A Girl is a Half-formed Thing is moving, funny – and alarming. It is a book you will never forget.

This was a beautiful book in so many ways, the different topics that are touched on really make it stand out in a reader's mind. It is truly a realistic portrayal of life in the way that instead of being one perfect stream, it is a story that goes all over the place and is written in a way that a person thinks about things, just jumping from one topic to another.

I was definitely invested in this book, really wanting to learn more about this girl and her relationship with her brother. Now as much as I am saying all this good stuff about this book, I do also want to say that I had a lot of problems getting through the story. Eimear McBride tackled some very hard-hitting issues with this book, but it is very easy to get lost with what exactly is happening because of the writing style. This is a book that really needs a reader's attention, and there will be points where you will want to go back and re-read things because you aren't sure that you understood what exactly happened.

Eimear McBride writes this story as if the reader is truly in the mind of this character, it is how a person would think. There are so many thoughts flying around that it is hard to really keep track of the story, for me this made it hard to follow and stick with, I wanted to give up many times because I was so lost (it also didn't help that I continually put the book down). I believe that this book could easily be a top book for many readers because of the way Eimear brings out such difficult topics, and how she shows a personal struggle against real problems... But at the same time readers need to invest themselves in this book and not leave it for too long of a time otherwise they will be completely lost and you won't be able to find your way back.

At the moment I have to sadly say that this book was not one that I enjoyed, but I do want to shelve it and come back to it in the future when I am more invested in the writing style that McBride has. I am just the type of person who needs everything to line up in an easy way, I enjoy more stories to be a bit more linear rather than a jumble of thoughts, and I am truly disappointed that this book wasn't for me because it is a touching story. And I do recommend it to those that can handle the writing style, just be prepared for a jumble of thoughts!