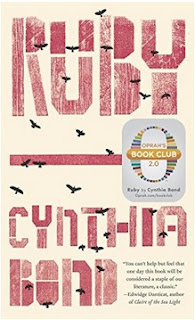 Ephram Jennings has never forgotten the beautiful girl with the long braids running through the piney woods of Liberty, their small East Texas town. Young Ruby Bell, “the kind of pretty it hurt to look at,” has suffered beyond imagining, so as soon as she can, she flees suffocating Liberty for the bright pull of 1950s New York. Ruby quickly winds her way into the ripe center of the city--the darkened piano bars and hidden alleyways of the Village--all the while hoping for a glimpse of the red hair and green eyes of her mother. When a telegram from her cousin forces her to return home, thirty-year-old Ruby finds herself reliving the devastating violence of her girlhood. With the terrifying realization that she might not be strong enough to fight her way back out again, Ruby struggles to survive her memories of the town’s dark past. Meanwhile, Ephram must choose between loyalty to the sister who raised him and the chance for a life with the woman he has loved since he was a boy.

I can totally tell why this book is an Oprah's Book Club pick, it is an emotional read but Cynthia Bond truly tugs at her readers heartstrings with these characters. Ephram Jennings was always in love with Ruby Bell but when he was younger he realized he missed his chance with her... but when she arrives back in Liberty, Ephram realizes that he has a second chance to be with her.

It took me a little bit of time to get into this story and understand what was really going on, but once I really started to get to know the characters I was hooked and I needed to know more. Slowly throughout the entire story, Cynthia Bond unravels Ruby's story and really lets us understand why she is so closed off. There is a lot of darkness in the undertone of the book, but it hits readers strong and shows how these characters are fighters in the toughest of times.

To be honest, I'm not entirely sure how to review this book because I found it to be an experience. The character of Ruby has fought through so much in her life to come back to more tragedy... it was hard to get through this book at times seeing what Ruby had to go through, and the deeper you get into the book, the deeper you delve into Ruby's past as well. At the same time Ephram has lived an interesting life, he has never left the town of Liberty and is blind to a lot of what is going on.

When Ruby comes back it seems like these two are meant for each other, Ruby helps open Ephram's eyes to more of what is hidden in his little hometown. While he helps Ruby learn to open up and trust someone else for once. Honestly, I felt that this was such a beautiful book, with characters that have to overcome a lot of adversity for the love they feel for one another, but you will find yourself in love quickly as well.

I will say there are a few scenes that are difficult to get through, they are disturbing and I found that it made the story hard to keep going with, but these scenes are truly important to both the past and future of Ephram and Ruby. This is one book I definitely recommend.