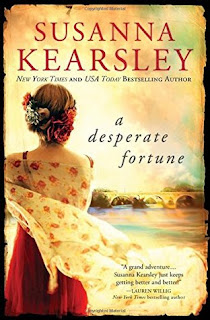 Publisher: Sourcebooks Landmark
Pages: 519
Received: Received a copy from the publisher through Netgalley

For nearly 300 years, the mysterious journal of Jacobite exile Mary Dundas has lain unread — its secrets safe from prying eyes. Now, amateur codebreaker Sara Thomas has been hired by a once-famous historian to crack the journal's cipher. But when she arrives in Paris, Sara finds herself besieged by complications from all sides: the journal's reclusive owner, her charming Parisian neighbor, and Mary, whose journal doesn't hold the secrets Sara expects.

It turns out that Mary Dundas wasn’t keeping a record of everyday life, but a first-hand account of her part in a dangerous intrigue. In the first wintry months of 1732, with a scandal gaining steam in London, driving many into bankruptcy and ruin, the man accused of being at its center is concealed among the Jacobites in Paris, with Mary posing as his sister to aid his disguise.

When their location is betrayed, they’re forced to put a desperate plan in action, heading south along the road to Rome, protected by the enigmatic Highlander Hugh MacPherson.

As Mary's tale grows more and more dire, Sara, too, must carefully choose which turning to take... to find the road that will lead her safely home.

I honestly am not sure about my thoughts on this book and I have sat with it for so long. I was really excited because I have heard such amazing things about Susanna Kearsley as an author, and I can see why people love her, she truly knows how to weave a story together, but this book is one that I don't know what to say and how to talk about it. The historical aspect is what really drew me to this book, the idea that there is a story that intertwines two women in different times really spoke to me. But when I finished this book I don't know if I truly felt that it worked for me.

Through a lot of the novel I felt that it was just two different stories and the only way that they really connected was because Sara was translating Mary's journal, other than that I really could not find other connections between these two women. This was a very long book that at times I just could not keep up to what was happening and I was lost with the perspectives and what had happened the last time I was with this character. I feel that the way these two stories attempted to intertwine, didn't work for me as a reader and I couldn't keep myself interested throughout much of the book, I was distracted and lost a lot of the time.

I did really enjoy the story of Mary Dundas and how she is playing such a dangerous game that she never asked to get into. Mary's story is fraught with deceptions and romance at the same time and there is danger at every turn as she helps conceal a man accused of a huge scandal in London. I enjoyed the intrigue that Susanna Kearsley gave me in this story, but then when things would switch back to present time and Sara's story I just felt that the connection I had was missing with this second part.

This story will appeal to some people, and I do believe that a lot of it appealed to me, but it just took me too long to get through. I liked it at times but for the most part it was too confusing and all over the place for me to truly love.