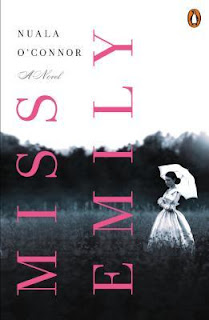 Received: Received a copy from Penguin Random House Canada in exchange for an honest review

Nuala O’Connor’s enchanting American debut novel, Miss Emily, reimagines the private life of Emily Dickinson, one of America’s most beloved poets, through her own voice and through the eyes of her family’s Irish maid.

Eighteen-year-old Ada Concannon has just been hired by the respected but eccentric Dickinson family of Amherst, Massachusetts. Despite their difference in age and the upstairs-downstairs divide, Ada strikes up a deep friendship with Miss Emily, the gifted elder daughter living a spinster’s life at home. But Emily’s passion for words begins to dominate her life. She will wear only white and avoids the world outside the Dickinson homestead. When Ada’s safety and reputation are threatened, however, Emily must face down her own demons in order to help her friend, with shocking consequences.

I am happy to have taken part in the blog tour for this amazing book, it is one that is beautifully written and will touch readers. Nuala O'Connor truly brings Emily Dickinson to life on these pages, but I love even more that it is not all about her but the story is also about those people around her. I thought it was interesting how Nuala used the voice of a maid to show a side of Emily.

The small thing that I found hard was how quickly the story would shift perspectives at times, I felt that I was really getting somewhere with one of the characters, the chapter would end and I would be following a bit of a different storyline. Though this got to me at times, I was able to easily forget about it because I was so into the story, the fact that one story would abruptly stop made me want to keep reading to know more about what they were doing. This book was intense at times, and I thought that the relationship between Emily and Ada was such a great way to show Emily's personality and how much she cares about those close to her.

Misss Emily is such an interesting take on Emily Dickinson's private life, especially being such a short book, there is not a lot of time to really bring readers into this idea, but I think Nuala did a great job. After reading this book I can say that I am more interested in studying up more about this poet. I have never been one to really know about poetry and I only know a couple of her poems, but the idea of her being so closed in really makes it hard for people to get to know her. There is a lot that readers will learn about Emily Dickinson as a person and you truly see what lengths she will go to so that she can save someone she loves.

Both the girls in this story have such strong personalities and despite their divide in class, Ada and Emily become fast friends because they are so alike in ways that others can't see. Both of these girls have a lot of hurdles to bear and they help each other, Emily is used to letting her writing take control and Ada comes out of nowhere and slowly brings her out of this shell she has been in for so many years. Honestly, this short little book has a lot to give readers, I actually wish there had been more because I felt that there was more to the story than I got to see.