Review: All the Rage by Courtney Summers 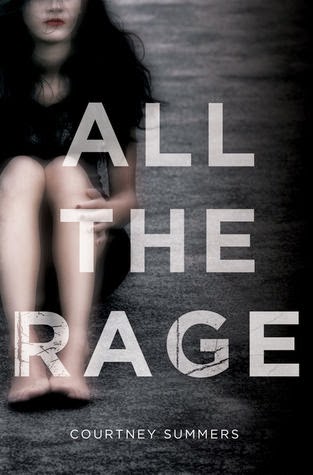 The sheriff’s son, Kellan Turner, is not the golden boy everyone thinks he is, and Romy Grey knows that for a fact. Because no one wants to believe a girl from the wrong side of town, the truth about him has cost her everything—friends, family, and her community. Branded a liar and bullied relentlessly by a group of kids she used to hang out with, Romy’s only refuge is the diner where she works outside of town. No one knows her name or her past there; she can finally be anonymous.But when a girl with ties to both Romy and Kellan goes missing after a party, and news of him assaulting another girl in a town close by gets out, Romy must decide whether she wants to fight or carry the burden of knowing more girls could get hurt if she doesn’t speak up. Nobody believed her the first time—and they certainly won’t now — but the cost of her silence might be more than she can bear.

With a shocking conclusion and writing that will absolutely knock you out, All the Rage examines the shame and silence inflicted upon young women after an act of sexual violence, forcing us to ask ourselves: In a culture that refuses to protect its young girls, how can they survive?

Courtney Summers has always had a way with words, her stories truly draw a readers' attention and she delves deep into the emotions of her characters. This book really hit me hard, and reading about everything Romy goes through makes this a very difficult story to read at times. Readers come into the story after Romy has tried to tell the truth about Kellan Turner, and we get to see what that has cost her and how she is trying to rebuild her life.

I definitely felt that Summers made this book an emotional rollercoaster for readers to really see how silence can affect a person, but so can speaking out if it is against the so called "golden boy". Romy is the perfect character for this role, she truly tries to hide herself away and she wants to reinvent herself so much that she gets a job out of town where no one really knows her or the past. But when someone else goes missing from a party, the truth must come out or there is the chance that more people will get hurt. Romy doesn't know how to get the truth out, no one will believe her because she is just someone from the wrong side of the tracks trying to bring down the good child....

Honestly, I love how Courtney Summers deals with such heavy social issues and she brings her readers deep into Romy's world. Romy wants to keep others from feeling how she does and from being as persecuted as she has been over the past few months. I can tell you though, that all this good about the book does not make it a light read at all. Summers definitely tackles a difficult situation and she truly shows the darkest part of it possible. Everything about this is gritty and hard to get through at times. This book is about Romy's struggles with her past and being able to open up again.

The one character that I absolutely loved was Leon, he was like a breath of fresh air for Romy. Someone who doesn't know about her past and can't judge her for what has happened. I truly believe that without him this would have been a completely different story. I wish I had more experience with Summers' writing before picking up this book, but I know I want more from her. She has really taken this story above expectations and brought out the dark truth behind a very real situation. But the other thing that Courtney Summers is able to do with this story is show the hope beneath the situation, despite all the problems Romy goes through for speaking out, this is a story of her coming to grips and knowing that there is still a light at the end of the tunnel.