Review: Forget Me by K.A. Harrington 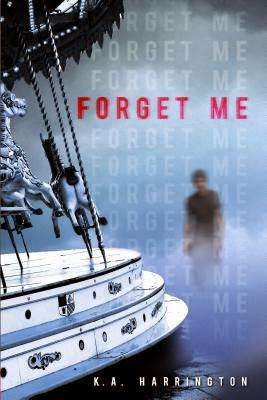 An edge-of-your seat psychological thriller with a romantic twist

On the three-month anniversary of her boyfriend Flynn’s death, Morgan uploads her only photo of him to FriendShare to get some closure—but she’s shocked when the facial recognition software suggests she tag him as "Evan Murphy." She’s never heard of Evan, but a quick search tells her that he lives in a nearby town and looks exactly like Flynn. Only this boy is very much alive.

Digging through layers of secrets and lies, Morgan is left questioning everything she thought she knew about her boyfriend, her town, and even her parents' involvement in this massive web of lies.

This story really caught my attention after reading the synopsis, I really wanted to know what secrets would come out in the end. I found myself immersed in the story as Morgan is trying to find out what happened to Flynn and why Evan looks to be the exact same person. This book has a great creepy, mysterious feel to it and I just wanted to keep going to find everything out.

I really enjoyed the mystery Harrington has going on in this story, as Morgan and Evan dig into the mystery of who Flynn is, many secrets are revealed that delve far deeper into the town then Morgan could prepare herself for. Many more people are involved, and Morgan begins to question what she truly knows about her parents and what happened in her town to bring it down.

Morgan's best friend was a great addition to the book, she is the opposite of Morgan and is the one pushing her to really dig into things. It was great to see someone get Morgan out of her room after dealing with the death of Flynn, it doesn't seem like many people are there for Morgan. There are many great characters that help make up this story, but the plot is what really kept my attention, as Morgan and Evan get closer to the truth, things seem to become more dangerous.

K. A. Harrington has written an intriguing story that I believe will catch the attention of many readers. I did not want to put this book down, and at a time where I am having trouble getting through a lot of books this one went by quickly.
Posted by Andrea @ Cozy Up at 6:00 AM