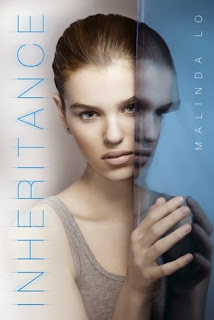 The triangular spaceship hovered motionless in the sky above Reese Holloway’s house, as inscrutable as a black hole. It had seemed like a good idea when they were inside: to tell the truth about what happened to them at Area 51. It didn’t seem like such a good idea now.

Reese and David are not normal teens—not since they were adapted with alien DNA by the Imria, an extraterrestrial race that has been secretly visiting Earth for decades. Now everyone is trying to get to them: the government, the Imria, and a mysterious corporation that would do anything for the upper hand against the aliens.

Beyond the web of conspiracies, Reese can’t reconcile her love for David with her feelings for her ex-girlfriend Amber, an Imrian. But her choice between two worlds will play a critical role in determining the future of humanity, the Imria’s place in it, and the inheritance she and David will bring to the universe.

In this gripping sequel to Adaptation, Malinda Lo brings a thoughtful exploration of adolescence, sexuality, and “the other” to a science fiction thriller that is impossible to put down.

I absolutely adored ADAPTATION when it came out last year, it was such a great concept and the ending left me wanting more, so when I had the chance to read INHERITANCE I was excited. INHERITANCE picks up exactly where book one left off, as Reese and David are preparing to give a press conference on their experience at Area 51.

You learn so much more about the Imrian race and what brought them to Earth. They were an interesting race and I think Malinda really made them real by giving such a detailed history. I was really intrigued with the characters and how they tried to help Reese and David learn more about their new abilities as well as teach them to master them.

There is also still the fallout between Reese and Amber happening around all this. Their relationship is very strained because of all the lies, and it makes things very difficult for Reese because as much as she doesn't want to she still cares for her. What I really loved is that Reese is dealing with issues that normal teenagers must face on top of this supposed government conspiracy and experiments.

This book was just as awesome as the first one, there are many more intense things that happen to Reese and David, and yet they stick together and help each other. I'm a little unsure with how I feel about the ending of this book, on one hand I loved the way certain aspects of the characters lives were described and we see what they decide to do with their lives, but I felt like I needed something else (though I can't put my finger on exactly what).

All in all I absolutely love this series and am sad to see it end, Malinda Lo created such an intriguing and heart pounding story, with characters that you can't help but love despite some of their downfalls.
Posted by Andrea @ Cozy Up at 6:00 AM