Review: Serpent on a Cross by Darya Asch 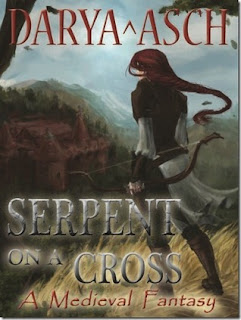 Pages: 241
Received: Received from the author in exchange for an honest review

When peaceful Drovania is suddenly destroyed one Sabbath morning by a legion of clawed, black-clad demons, led by a Russian nobleman with a mysterious connection to her mother, Dennah, a seventeen-year-old healer and archer, must face the truth of her heritage and the explosive Power that murder, rape, and pogrom have awakened within her.

Accompanied by Jeth, a blacksmith, and a group of guardsmen from their village, Dennah will face golem-like constructs, a witch with an uncanny resemblance to Baba Yaga, and a dangerous half-human who’ll stop at nothing to claim her as his own.

Set in the second half of the 11th century in and Kievan Rus, SERPENT ON A CROSS is a fantastical mix of medieval adventure, Slavic mythology, and Jewish mysticism.

I always have fun reading self published books once in awhile, there is something intriguing about them. This book really stood out to me because of the medieval fantasy aspect, which I have really come to enjoy since I began blogging. When Darya Asch contacted me I was happy to help get word about her book out in the world.

This is a book that is full of action and intrigue right from the beginning of the story. Being a medieval fantasy book, there is a lot of death and destruction throughout, and Asch definitely goes all in with it. I felt disturbed at times, but it's what it was like in those times. I do feel that this book was a lot more adult than I was expecting it to be. The one thing I found very difficult were the many characters in this book. I realize that fantasy books have many characters that are to be followed, but I found that there was no real introduction to each of the characters, and not much time to really get to know these characters. I felt like I was thrown into this story and the lives of the characters and there really needed to be more of a build-up, and this book was just a little too short to get into all of that.

I really loved the character of Dennah, she grows throughout the book, quickly learning about her power and using it to save those she loves. She is on a quest to save her mother and she will stop at nothing to do it. Dennah has amazing strength throughout the story but she has her weaknesses too (especially letting her emotions take over and her power getting the best of her). Dennah is the character that the book is focused on and you do learn a lot about her and her past, and she is one of the characters that is the most fleshed out, but even still I think there is more to her to be known (I did have to keep reminding myself that this is the first in a series).

I did find I was confused by the plot at certain points, it seemed that the story jumped around quite a bit from the perspectives of different characters and I would get lost as to who I was following (I think because some of the characters were not described enough). But the main problem for me was the love story between Dennah and Jeth, I found them confusing  saying they love each other and then talking about how they haven't really talked about their feelings. It was a very complicated storyline and the back and forth between these two characters took away from the story a little bit for me. I also found myself confused with the many Jewish terms throughout the book (I didn't realize until after that there was a glossary at the back of the book, which is difficult to work with in an ebook). The Jewish mysticism was interesting and made me want to research it more, but it was difficult not understanding a lot of what was being talked about.

This was an intriguing book, but there was too much going on for me to understand everything. Asch incorporates some great history into her book, the characters just need a little bit more of an introduction to make it easier to follow. I can see many people enjoying this, I just felt that there were too many characters that were not absolutely needed and that there was a bit of a disconnect in the plot.
Posted by Andrea @ Cozy Up at 6:00 AM