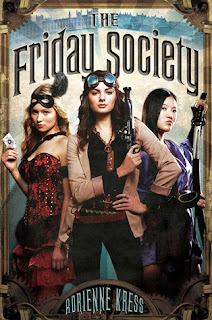 Pages: 440
Received: Borrowed from a friend

An action-packed tale of gowns, guys, guns –and the heroines who use them all

Set in turn of the century London, The Friday Society follows the stories of three very intelligent and talented young women, all of whom are assistants to powerful men: Cora, lab assistant; Michiko, Japanese fight assistant; and Nellie, magician's assistant. The three young women's lives become inexorably intertwined after a chance meeting at a ball that ends with the discovery of a murdered mystery man.

It's up to these three, in their own charming but bold way, to solve the murder–and the crimes they believe may be connected to it–without calling too much attention to themselves.

Set in the past but with a modern irreverent flare, this Steampunk whodunit introduces three unforgettable and very ladylike–well, relatively ladylike–heroines poised for more dangerous adventures.

I loved the story of this book, there is a great mystery with murders happening around the city and in some way each of these three girls becomes involved, but the story is about so much more than just the mystery. There is so much about these three girls meeting one night and a growing friendship because of the murders. Each of the girls is unique and the bring something different to the story, but they all bring a fiery attitude and a sense of justice.

This story was such a great adventure of a book but really what this book is about is female empowerment. This book really revolved around the friendship of the three girls, the little romance that was there was far in the background and it was nice to see a book where the women did things for themselves and not relying on men. I really loved the strengths of each of the girls, but my favourite had to be Michiko. She was such an amazing character, and for one who understands and speaks very little English she still had this way of communicating with the other characters. I also really liked that she had this way of trying to do things on her own and yet in the end coming to be part of this strong group.

The ending really ties up the story well, but still leaves it open for Kress to write a sequel if she wants (which I hope she does!) This book was a lot of fun to read, and I really loved how Kress brought out the female empowerment in her story! If you love mystery and action all tied up together in a nice package this is the book for you.
Posted by Andrea @ Cozy Up at 10:08 AM