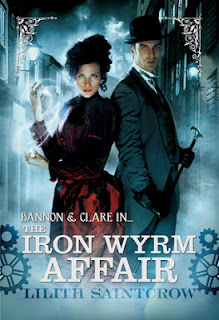 Emma Bannon, forensic sorceress in the service of the Empire, has a mission: to protect Archibald Clare, a failed, unregistered mentath. His skills of deduction are legendary, and her own sorcery is not inconsiderable. It doesn't help much that they barely tolerate each other, or that Bannon's Shield, Mikal, might just be a traitor himself. Or that the conspiracy killing registered mentaths and sorcerers alike will just as likely kill them as seduce them into treachery toward their Queen.


In an alternate London where illogical magic has turned the Industrial Revolution on its head, Bannon and Clare now face hostility, treason, cannon fire, black sorcery, and the problem of reliably finding hansom cabs.

The game is afoot..

This book really interested me, I don't know a lot about the steampunk genre (I've read very few books in this genre). This book has everything in it, mystery, magic and even a little romance (though through everything else that part did not compare). Everything seemed to happen so fast in the book, but in a good way that definitely will keep readers interested. I did feel like this book took me a little longer to get through than expected because I found myself needing to flip back and forth to understand a few things.

Saintcrow has a very intelligent style of writing, which goes along with her characters. The idea of the mentaths are that they are intelligent people that work with logical solutions and are disturbed when something doesn't make sense to them. At times I felt like I needed a glossary or footnotes to help me understand what some of the things were that the characters were talking about, but as I went along I started to get the hang of things.

The story felt quite like a Sherlock Holmes story with a little more attitude (and a lot more magic/sorcery added in). Bannon is a character that goes against all perceptions of what a woman is like in Victorian times. Bannon often swears and uses "unladylike terms" as is often quoted throughout the book. Her attitude towards things was a lot like Sherlock Holmes, it was very I don't care, everything was focused on solving the mystery.

I really enjoyed the interaction between Bannon and her Shield. Emma is used to being in charge and refuses to relent, even though the Shield is there to protect her. The dynamic between the two was interesting and at times I found it could be quite humorous.

I really enjoyed this story, and am interested to keep going with Bannon and Clare's adventures in the future, but I will warn readers that this was quite a read and it took me quite a few days even though it is just a little over 300 pages. I found myself getting lost easily and things were a little dense at times that I really needed to reread paragraphs.
Posted by Andrea @ Cozy Up at 9:00 AM